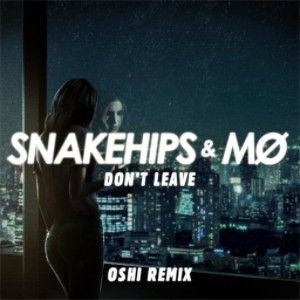 The talented young artist has built a reputation for his unorthodox compositions, fusing genres and eluding music theory guidelines, counting Lorde, Mija and Tokimonster among his many fans.

The creative remix utilises soft key melodies in the verses to build up to a rolling bass-led drop around the choruses.

Oshi’s remix adds a new side to the original single from Snakehips and MØ: ‘Don’t Leave’ is an emotive yet forward-thinking ballad. The relatable single has already had an incredible reception since its release just one month ago, having amassed over 40 million streams total in that time.

This new single is set to build on an incredible past year for Snakehips, whose most recent single ‘Cruel’ featured the vocal talents of bonafide superstar Zayn. They achieved their first top 5 and won an Ivor Novello for their Platinum selling single ‘All My Friends’, a collaboration with Chance The Rapper and Tinashe. Their popularity extended to their tour schedule; last year Snakehips played at the likes of Coachella, Lollapalooza, Glastonbury and Bestival, sold out headline shows at London’s KOKO and LA’s The Wiltern, as well as touring across America, Australia, Europe and Asia.

MØ is one of the fastest rising pop stars on the planet and ‘Don't Leave’ comes hot on the heels of her acclaimed hit singles ‘Final Song’ and ‘Drum’. The co-writer and voice of the worldwide smash Major Lazer tracks ‘Cold Water’ and ‘Lean On’ is currently putting the finishing touches to her eagerly anticipated second album, due for release in 2017. MØ has played sold out tours and won over festival crowds worldwide. Last Autumn she completed her biggest UK headline tour to date, including a sold out show at London’s iconic Roundhouse.