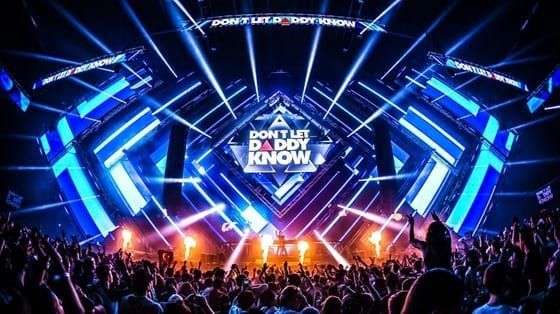 The world-renowned dance concept Don’t Let Daddy Know will be coming to the USN Bolton Arena in Greater Manchester on Saturday 7th October 2017. Formerly held at Manchester’s iconic Victoria Warehouse with two sold out shows in 2015 and 2016, DLDK and the Victoria Warehouse Lost In Time events team are set to go big for the 2017 event with a capacity of over 10,000 people. It comes with extended, top-notch production and a hard hitting line-up, which will be announced on Monday 15th June. Ticket pre-registration is now open via http://m.me/WeAreLostInTime/.

What began five years ago on the magical island Ibiza, is now a worldwide phenomenon with events in more than fifteen countries. Entertaining thousands of DLDK fans across the globe, the brand has the reputation to create a unique feeling of togetherness, even in the most massive venues. After celebrating their 5-year-anniversary at the Ziggo Dome in Amsterdam in the beginning of March, it is now time to enlarge the show to a bigger venue in Greater Manchester. Expect the best, including a new stage design, unique entertainment and a line-up that only DLDK can provide.

“After hosting two sold-out DLDK events at the Victoria Warehouse in 2015 and 2016, we realised that the show has outgrown the venue and we needed a space with a bigger capacity. Clubbers from all over Europe attend DLDK in the UK, so holding the 2017 event at the USN Bolton Arena means more people can attend and we can expand on the production to create a show of epic proportions. The sound, technical and lighting teams from the Victoria Warehouse will all be working at the Bolton Arena, pulling out all the stops to make 2017 the most memorable event yet. This one will be huge – don’t miss it!”

DLDK UK will be the second stop of the ‘Don’t Let Daddy Know World Tour 2017’. After this show, the concept will travel around the world to other big cities like Bangkok, Macau, Mumbai, Santiago, Hong Kong, Shanghai, Beijing, Ibiza, Tokyo and more!

Sign up now for exclusive access to pre-sale tickets via m.me/WeAreLostInTime/. Tickets will be on sale from Monday 25th June via www.dldk.com.