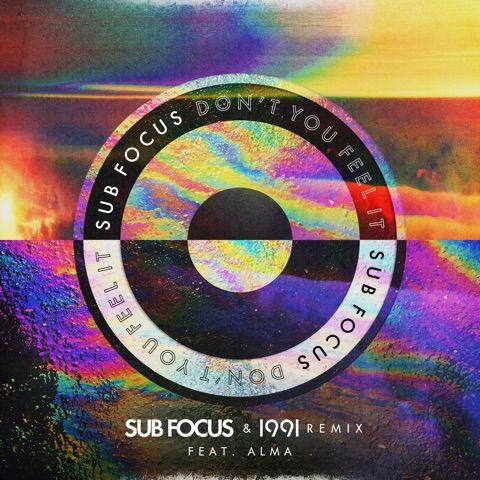 At the forefront of the new generation of cutting edge drum & bass producers and taking the underground world by storm, 1991 partners up with Sub Focus here to add waves of rumbling breakdowns and a hefty bassline to the otherwise pop-infused melody – creating a dynamic edit perfect for peak time sets.

To celebrate their collaboration, Sub Focus and 1991 went back-to-back live on Facebook last week – watch here. The original of ‘Don’t You Feel It’ has reached nearly 3 million global Spotify streams in 3 weeks and has been supported by several BBC Radio 1 tastemakers including Mistajam, Target, Danny Howard and Friction to name a few.

Sub Focus enlists the eclectic vocals of songstress ALMA. The singer has won two awards at the Finnish Grammys for ‘Best Newcomer’ and ‘Best Export’. Earlier this year, ALMA played a headline slot at BBC Radio 1 Future Festival and performed alongside Ray BLK at AMP. With her debut album in the pipeline, ALMA has been working with the likes of MNEK, Rudimental, Gorgon City and Two Inch Punch.

Emerging onto the scene last year with his powerful anthem ‘Witchdoctor’, 1991 has been credited for bringing drum & bass to a wider audience. Having gained rapid success with several EPs and handpicked to craft remixes for Skream, Chase & Status and My Nu Leng – the enigmatic artist is heralded by BBC Radio 1 DJ Annie Mac.