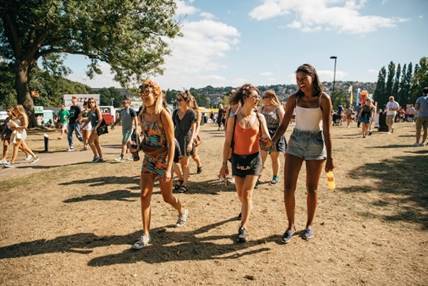 After the sell-out success of Tramlines 2018, which attracted nearly 30,000 festival-goers to Hillsborough Park in Sheffield from Friday 20th – Sunday 22nd July, the festival today confirms it will return in 2019 over the weekend of 19th – 21st July. A limited number of early bird tickets for 2019 sold out within minutes of going on sale, along with tier 1 tickets selling out within hours of becoming available, proving just how successful the 2018 festival was. Tier 2 tickets can now be purchased from www.tramlines.org.uk still priced at an attractive £59.50 plus booking fee, and once again showing that Tramlines is one of the best-value three-day festivals in the country.

The 10th installment of Tramlines Festival left its multi-space format behind to be held over one site on Hillsborough Park including four stages of music and a fifth new and improved ‘Into The Trees’ area. Guests enjoyed storming performances from Stereophonics, Noel Gallagher’s High-Flying Birds, Craig David’s TS5, Clean Bandit, Blossoms, De La Soul and Stefflon Don; a debut comedy lineup; pop up cinema; craft ales and a tantalizing selection of food traders.

“Sheffield has never enjoyed a bigger party than the one that took place in Hillsborough Park this weekend. I’d like to thank everybody who came and made it the special event it was. The sales for next year’s festival took us all by surprise and we are overwhelmed to have sold so many tickets for 2019 faster than any other year. Sheffield’s never had a three-day festival like this before, the support for the event has been amazing and we intend to make Tramlines 2019 even better.”

A payment plan for tickets to Tramlines 2019 is also available. The first month’s payment is free when purchased in July, and £7.70 per month, thereafter.

Other highlights of Tramlines 2018 included hundreds of people taking an early Sunday afternoon aerobics class with Mr Motivator, tens of thousands of fans joining in unison to sing Noel Gallagher’s rendition of All You Need Is Love, and a Sheffield Police Officer taking to the shoulders of a festival goer to watch Noel’s performance, a video of which has gone viral with over 24,000 views.

The debut comedy lineup programmed by the Leadmill was a resounding success, with crowds spilling far outside the tent to catch performances from the likes of Henning Wehn, Sheffield’s John Shuttleworth, Tom Stade and Bethany Black.

Tramlines 2018 attracted more families than ever. It saw them attend the improved Into The Trees area complete with film screenings of family and cult classics, party DJs, and arts and crafts workshops, giving a first-time festival experience to kids of all ages.

Festival organisers were hit with a tram strike over the weekend, but due to last-minute, meticulous contingency planning, replacement buses were laid on to ensure festival goers could leave site safely and without fuss. Elsewhere across the festival no major incidents have been reported.

The presence of the Tramlines Festival Director, Sarah Nulty, who passed away just three weeks before event, was felt across the weekend. Bands, organisers and attendees honoured Sarah’s passing at the event, wearing ‘BeMoreNulty’ t-shirts. Acts including, Reverend and the Makers, Milburn, Universal Tree, Bang Bang Romeo, Everly Pregnant Brothers and many more all paid tribute during their performances. Sunday headliner, Craig David, spoke about Sarah during his set and encouraged the audience to sing along in her memory, which he later tweeted, plus huge crowds gathered to watch a special video tribute before Craig took to the stage.

The move to Hillsborough Park was undoubtedly a big achievement for Tramlines and a step up the ladder as one of the UK’s best-loved festivals. Lineups and other news about the 2019 event are to be made in due course. Keep an eye on @Tramlines on socials for announcements.