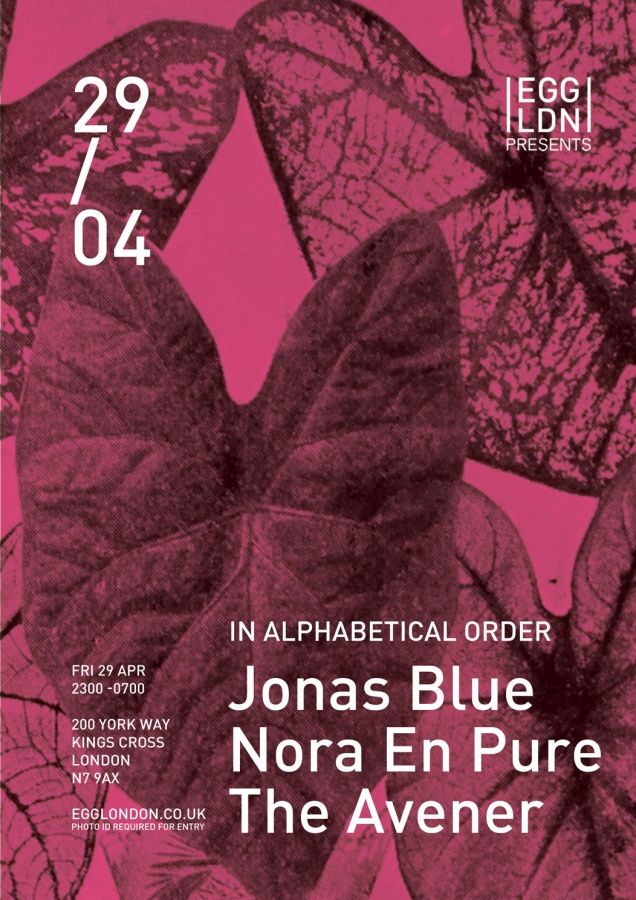 Just 21-years-old, London-based Jonas Blue has set his career rolling with a a tropical house version of Tracy Chapman’s ‘Fast Car’, his mum's favourite tune, hitting the Top 5 in Australia. Already working in studios in L.A, Stockholm and London, he has a big future ahead of him.

When it comes to main room, melody-infused house, Swiss-based Nora En Pure has few equals. Whether its remixing RÜFÜS's piano drenched anthem 'You Were Right', adding a soaring edge to Me & My Toothbrush's Brandy sampling 'One Thing' or transforming Spandau Ballet's 'Pure' into an ecstatic glitter ball moment with last year's 'Saltwater', her sets always deliver dance floor drama. Having most recently released on Dutch giant Spinnin', while also remixing the stadium filling Faithless, check her Purified Radio Show for a further taste of the sound that has just taken her around the US as part of Enormous Sounds.

They're joined by Parisian The Avener. Best know for 2014's folksy 'Fade Out Lines', featuring vocalist Phoebe Killdeer, an iTunes No.1 in Germany, he's gone on to show a similarly fine-tuned ear for a universally enjoyable song. Recently borrowing the distinctive vocals of UK singer and guitarist John Martyn for 'Glory Box', he's also harnessed Rodriguez, subject of the award winning documentary 'Searching For Sugar Man', for 'Hate Street Dialogue'. Crossing genres and eras as displayed on last year's 'The Wanderings of the Avener' album, The Avener keeps it deep and poppy – showing exactly why he's previously been the ghostwriter for many underground hits.