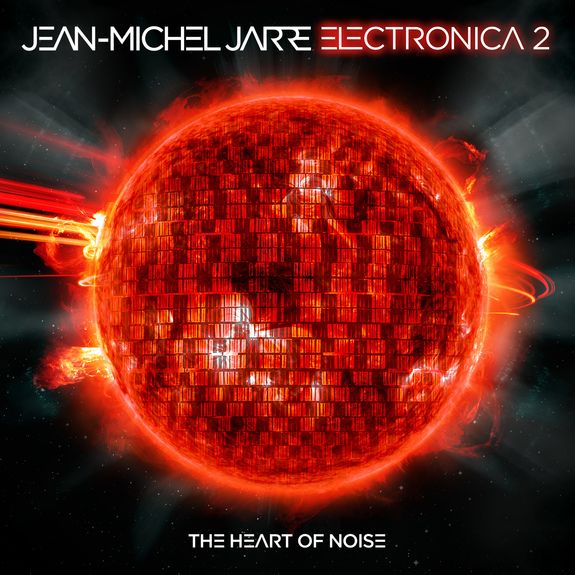 Following the unprecedented success of ‘Electronica Vol 1: The Time Machine’, The Godfather of Electronic Music, Jean-Michel Jarre, now pulls back the curtain on the details for Vol 2 of his ‘Electronica’ project, titled, ‘The Heart of Noise.’

Having amassed a mesmerising collection of collaborators to take part on Vol 1: ‘The Time Machine’ which upon release last year became one of Jarre’s most successful releases, the Frenchman has now secured another fifteen of music’s most iconic artists to take part on ‘The Heart of Noise’.

This time around, Rone, Pet Shop Boys, Primal Scream, E.S., Julia Holter, Gary Numan, Jeff Mills, Peaches, Siriusmo, Yello, The Orb, Sebastien Tellier, Hans Zimmer, Cyndi Lauper and Christophe have all been handpicked by Jarre to complete his Electronica double album project. As with Vol 1, Jarre personally connected with each of his collaborators and travelled extensively to work together on the music.

Set for release on May 6, 2016, via Sony Music International, those who pre-order the album will receive the first and title track, ‘The Heart of Noise’, made with fellow countryman, Rone, as an instant free download.

‘The Heart of Noise’ is a tribute to Luigi Russolo, Italian composer and builder of experimental musical instruments, who proposed in 1913 in his Futurist manifesto ‘Art of Noises’ a number of conclusions about how electronics and other technology would allow futurist musicians to "substitute for the limited variety of timbres that the orchestra possesses today the infinite variety of timbres in noises, reproduced with appropriate mechanisms". Russolo predicted the dawn of the synthesiser and Electronic Music.

"I've wanted to tell a story for a while regarding electronic music history and its legacy from my point of view and experience, from when I started to nowadays," says Jarre. "So I planned to compose for and collaborate with an array of artists who are, directly or indirectly linked to this scene, with people I admire for their singular contribution to our genre, that represent a source of inspiration for me over the last four decades I have been making music, but who also have an instantly recognisable sound.”

The release of ‘Electronica’ Vol 1 was unmistakably Jarre’s most ambitious project to date and the results did not disappoint. The album broke into the top 10 in over 25 countries worldwide and was lauded by the media for its vision, with The Guardian writing “by assembling such a stellar lineup, Jarre is reminding us of his status as a pioneer,” whilst The Sunday Times agreed with this notion, claiming “the French synth superstar and his collaborators here are an electronic dream team.” Mojo also got in on the act, labelling it “an unqualified triumph.” The album also received positive reviews from the likes of The Evening Standard, Thump, Mixmag, Le Figaro and GQ amongst many others upon release.

Furthermore, 2016 will see Jarre’s return to the stage, with festival performances confirmed so far at Sónar and Melt this summer, followed by an international arena tour commencing in Europe this autumn.

Full Tracklisting for ‘Electronica Vol 2: The Heart of Noise’ is: