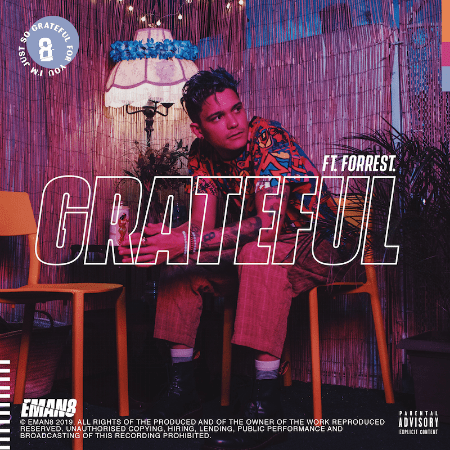 Los Angeles based singer, MC, and producer EMAN8 has released ‘Grateful’, the upbeat new single featuring Forest, ahead of his debut album release on June 1st.

An ode to the gratitude that comes with your dreams coming true, EMAN8 wrote ‘Grateful’ with his girlfriend, Molly Moore, to capture the feeling of falling in love with somebody amazing. Realizing that a lot of times the people that we love the most go unrecognized, ‘Grateful’ is EMAN8’s way of showing his appreciation to those in his life who deserve it most.

‘Grateful’ features the vocals of Forest, an independent, self-taught singer/songwriter/producer from Katy, Texas, who also sings/produces and writes for the band Surfaces.  In June 2018 he released his first project WARM and despite having no industry connections or marketing initiatives, he has been able to organically climb to nearly 300,000 monthly listeners on Spotify.

‘Grateful’ was self produced by EMAN8 along with production from Dave Berg, who’s also co-producedEMAN8’s previous singles ‘Inspired’ and ‘IOU’.  The track takes a bit of a different approach then previous releases relying heavily on EMAN8’s Jamaican heritage and bringing it into his music. The production is also more minimal, with four key production elements; drums, bass, guitar, and horns creating a smooth and simple melody.

Previously releasing music under his real name Brandyn Burnette, EMAN8 is a new moniker focused on positive, inventive, and intelligent storytelling through music. With writing credits including Charlie Puth, Jon Bellion, and recent Backstreet Boys single ‘Breathe’, EMAN8’s journey has been a quick rise to success drawing comparisons to Anderson.Paak and Chance The Rapper.

‘Grateful’ featuring Forest is out May 1st with EMAN8’s debut album set for release on June 1.