The Epic Pool Parties just got a bit more epic for this year’s Winter Music Conference in Miami with the news that DESERT HEARTS will be hosting their own gatherings, and that the likes of Chris Stussy, Luigi Madonna, Rich NXT, Skream, Sidney Charles, Detlef, Huxley, Mason Collective, Mason Maynard, MK, Richy Ahmed and more have been announced for AMNESIA PRESENTS X DO NOT SLEEP and REPOPULATE MARS parties.

The sizzling six days of events kick off the 2020 Winter Music Conference in Miami on Tuesday, March 17th for the Official WMC OPENING PARTY with the legendary Kings of House, aka Louie Vega and David Morales, and run until Sunday, March 22nd. Downtown Miami’s Kimpton EPIC Hotel is the location for the musical madness and views of the Biscayne Bay and the stunning Downtown Miami backdrop. The pool deck itself is on the 16th floor amongst lush palm trees, bars and cabanas making it an exclusive setting hosting a world-class sound system.

On Wednesday March 18th, Amnesia team up with underground house party Do Not Sleep, who have been at the sharp edge of the scene for years and have a global following. The full line up is now revealed to include very special guest and notorious party starter Skream, Ibiza favourites Ilario Alicante and Amnesia resident Mar-T, techno titan Luigi Madonna, FUSE associate Rich NXT, house mainstay Chris Stussy and Heavy House Society label boss Sidney Charles.

Friday March 20th is Lee Foss’s red hot Repopulate Mars label party with the boss himself plus long time New York house icon MK, who runs his own Area10 brand and has been a pioneer in the scene since the 90s. His work with labels like Hot Creations and Defected has kept him in the headlines and never far from the world’s finest parties. Key tech house talents like Greek star Detlef and Prok | Fitch, DJ extraordinaire Richy Ahmed, non-stop underground hit maker Huxley, break out UK innovator Latmun, the fast rising, hard hitting Manchester crew Mason Collective, plus DJ Award for Best Newcomer Mason Maynard, Martin Ikin, Ben Sterling and many more also play.

On Saturday March 21st, the colourful Desert Hearts will bring their own particular brand of party love to the Epic series. What started as an intimate renegade gathering in the Mojave Desert has since blossomed into a multiple Desert Hearts Festivals and traveling City Hearts Tour events that also picked up DJ Mag’s ‘Best of North America’ title in the Boutique Festival category in 2018. Artists playing include Mikey Lion, Marbs, Lee Reynolds and Porky who will join special guests and full line up. Part boutique festival, part record label, and part globetrotting party brigade, this ragtag crew of dreamers has emerged as a vibe-focused force radiating a conscious ethos of house, techno and love always with world-class bookings and a renegade vision that stands them apart. Expect more of that magic in Miami.

As the 2020 Epic Pool Party series gets ever closer and more details are revealed, the excitement continues to build for what promises to be the most essential parties in all of Miami for WMC 2020. 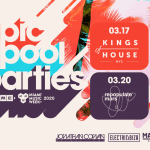