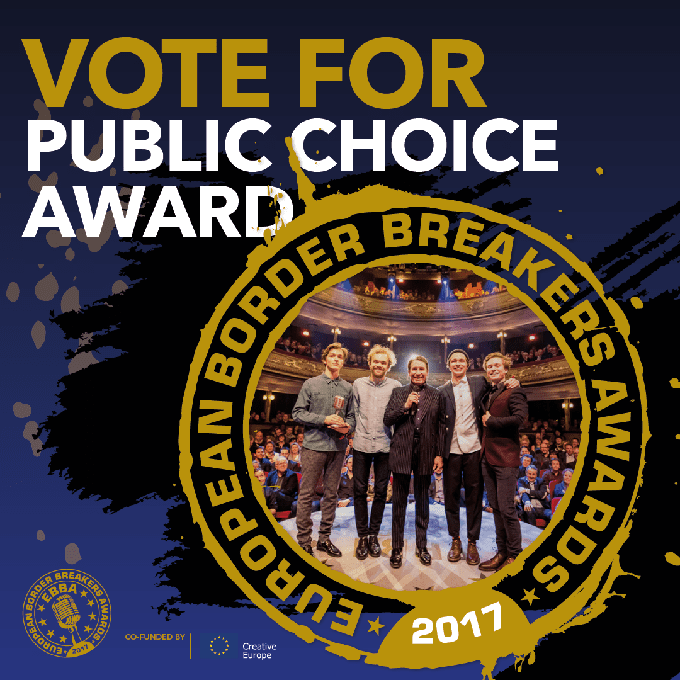 On 11 January 2017, the Dutch city of Groningen hosts the 14th European Border Breakers Awards, the European music show dedicated to up-and-coming bands and acts. The Awards this year go to Alan Walker (no), Jaakko Eino Kalevi (fi), Namika (de), Hinds (es), Filous (at), Jain (fr), Dua Lipa (gb), Era Istrefi (al), Natalie La Rose (nl) and Walking on Cars (ie). The awards recognise new acts based on success outside their own country. The Awards are a chance to discover and celebrate the best of contemporary European music.

All the winners will feature in the award show, presented by hosted by celebrated musician and presenter Jools Holland. The show will be recorded for TV and is available to all European public broadcasting stations.

Public Choice Award – EBBA 2017
From 5 December, fans and EBU audiences are invited to vote for their favourite artist among the winners on the European Border Breaker website (www.europeanborderbreakersawards.eu). The winner of Public Choice Award will be revealed live in Groningen.

The EBBA
The EBBA celebrate new and border-breaking artists who are creating today and tomorrow's music. From Adele (gb) to Christine & the Queens (fr), the EBBA winners represent some of the standout European sounds of recent years. Other previous winners include Stromae, Gabriel Rios, Hozier, Of Monsters and Men, Mumford & Sons, Aurora, Disclosure, John Newman, C2C, Tokio Hotel, The Script, Years and Years, Robin Schulz, Carnival Youth, MØ and Selah Sue. Last year, 14 public TV stations televised the award show of 2016, which included performances by Oscar and the Wolf (be), Aurora (no) and Álvaro Soler (es).

From groups of enthusiastic gig-goers out on the weekend, through to an industry dedicated to making the music you love, ‘Music Moves Europe’. The EBBA is just one of the ways that the EU celebrates European popular and contemporary music, bringing the artists, the industry and the fans together to celebrate and enjoy the best of European music.

Every year, 10 European artists receive an EBBA in recognition of their success in countries other than their own. This success is measured by:

The European Border Breakers Charts – launched earlier this year and compiled by Radiomonitor – rank tracks from around Europe based on airplay outside the act’s country of origin.

To be eligible for the 2017 awards, the artists must have achieved border-breaking success with their first international release in Europe between 1st of August 2015 and 31st of July 2016, and also come from a country participating in the EU's Creative Europe programme.

The EBBA, now in their 14th year, are an EU Prize, organised by Eurosonic Noorderslag in partnership with the European Commission (Creative Europe) and the European Broadcasting Union, with support from Buma Cultuur, the Dutch Ministry of Education, Culture and Science, the Province of Groningen, the City of Groningen and Music Week.

We thank SHURE for their technical support. The SHURE model 5575LE is the protected property of Shure incorporated and its subsidiaries