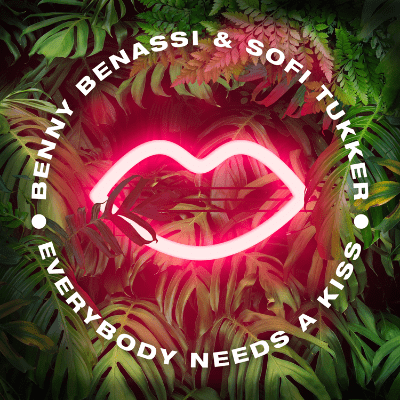 Legendary Italian producer and DJ Benny Benassi is back, this time teaming up with Sophie Hawley-Weld and Tucker Halpern – best known as SOFI TUKKER – on the new track ‘Everybody Needs A Kiss.’

A storming summer anthem, the sultry single is led by the high-tempo beat of Benny Benassi, the mastermind behind the iconic, genre-defining electro house track ‘Satisfaction’ and massive international hit ‘Cinema’ featuring Gary Go. ‘Everybody Needs A Kiss’ utilises a deep horn-led hook, and relies on strong melodic elements which look set to propel the track into the realms of 2018’s biggest summer anthems.

Scoring huge success with their infectious hit ‘Best Friend’ featuring NERVO, The Knocks, and Alisa Ueno – which was later remixed by Heldeep label owner Oliver Heldens – Sofi Tukker have received widespread praise across the board, with ‘Everybody Needs A Kiss’ following the recent release of their album, ‘Treehouse.’ “I am a huge fan of Sofi Tukker and can’t stop listening to their album,” says Benassi. “They have it all: their sound, their style, their attitude, their look. It’s an absolute pleasure to be releasing a track together.”

Launched to stardom with his groundbreaking global smash ‘Satisfaction’ and its game-changing music video, Benny Benassi solidified his mark as a pioneer in dance music with his trademarked infusion of house and electro. The world-class producer went on to win a Grammy in 2008 for his remix of Public Enemy’s ‘Bring The Noise,’ further establishing the Benassi name and leading to production work with the likes of Madonna and John Legend, amongst others.

Benassi’s star-studded 2011 album ‘Electroman’ boasted an eclectic mix of international chart-topping tracks, including the Chris Brown collaboration ‘Beautiful People,’ one of the biggest crossover dance records of its time. Following the release of 2016’s ‘Danceaholic’, featuring yet another massive summer anthem with Brown, ‘Paradise’, his music continues to evolve whilst still remaining true to the very core of the Benassi sound.

Nominated for a Grammy for their genre-smashing previous release ‘Drinkee’, which featured in Apple’s commercial for the Apple Watch, New York-based Sofi Tukker continue to have blitz all before them, finding themselves playing in front of increasingly larger audiences, wowing clubs and festival stages all over the world. Joining forces with Benassi marks another highlight in the dance-pop duo’s wildly successful year.

“We love Benny. We had been fans of his and right when we met, he was so gracious, fun and kind. We immediately connected,” says the pair of working with the famed producer. “He's really one of the nicest guys out there and he's such a talented DJ. We're so grateful to be able to make things with him!”

An electrifying production from Benassi, whose double-decade career has seen him play across iconic stages such as Coachella, EDC, Ultra Music Festival, and Tomorrowland to name just a few, ‘Everybody Needs a Kiss’ is out now!