The track will feature on his forthcoming 8th studio album

UK chart-topper Example has unveiled the official video for his latest single ‘Every Single Time’, out 14th October.

Exploring themes of family, love and loss, and recognising what’s most important in life, the affecting official video for ‘Every Single Time’ provides a perfect visual depiction of the track’s poignant energy. It was directed and produced by Macario De Souza from Hype Republic, a multi-award-winning production company that has worked with the likes of Twenty-One Pilots, Red Bull, Jimmy Fallon and Parkway Drive.

Set to feature on his hotly anticipated eighth studio album ‘Every Single Time’ was released last month and coincided with performances at the likes of Creamfields, where Example hosted his own ‘Try This For Example’ stage, Sundown Festival and Isle of Wight Festival. He is set to embark on a headline tour early 2022 with a string of dates across the UK.

One of the 21st century’s defining musical artists, Example is a platinum-selling artist that has a UK #1 album and multiple chart-topping singles under his belt. A multi-genre artist that bridges the gap between electronic, rap and pop, his inescapable anthems have seen him collaborate with fellow global stars Professor Green, Wretch 32, Calvin Harris, Giggs, Pet Shop Boys, Skream and many more.

A heartwarming piece of cinematography, the official video for ‘Every Single Time’ ideally complements the mood of the track.

To find out more about Example, go to: 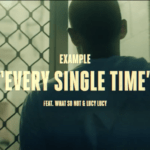