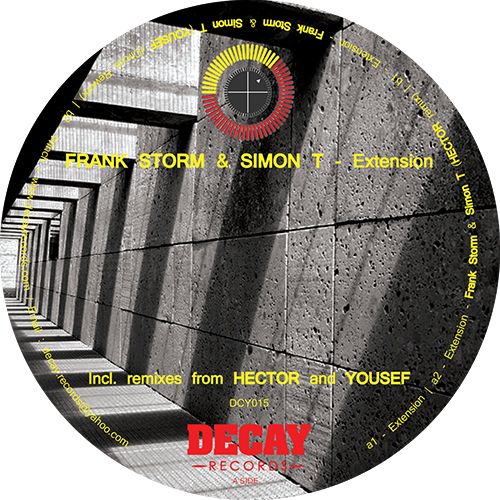 Pisa, Italy born artist Frank Storm has been releasing material for the past five years via the likes of Frequenza, Baile Musik, Sleep Is Commercial and Serkal, and just recently became a part of Carl Craig’s new concept events ‘Detroit Love’. Here we see Frank join forces with Milan’s Simon T for a collaborative EP on Decay Records, a growing London based imprint which is home to artists such as Franck Roger, Neverdogs, Alex Arnout and Geddes.

Kicking things off is the original mix of title track ‘Extension’ from the duo, a robust percussive led workout laid out over seven a half minutes with rumbling low end and swirling atmospherics running alongside pulsating synth flourishes and hypnotic vocal murmurs. Following is ‘Winch’ which takes on a more stripped back feel with spare distorted drum sounds, snaking synth grooves and eerie low-pitched vocal licks.

Desolat’s Hector steps up to rework ‘Extension’ next and dismantles the original composition into a low-slung, stripped back affair via shuffling organic percussion, a subtly blooming underlying tension and dubbed out swells of the original synth lines. Circus main man Yousef then adds a more melodic edge to things with his take on ‘Extension’, fusing bubbling arpeggios and soaring pad lines with reshape snippets from the original track.