Festivals worth travelling to this summer 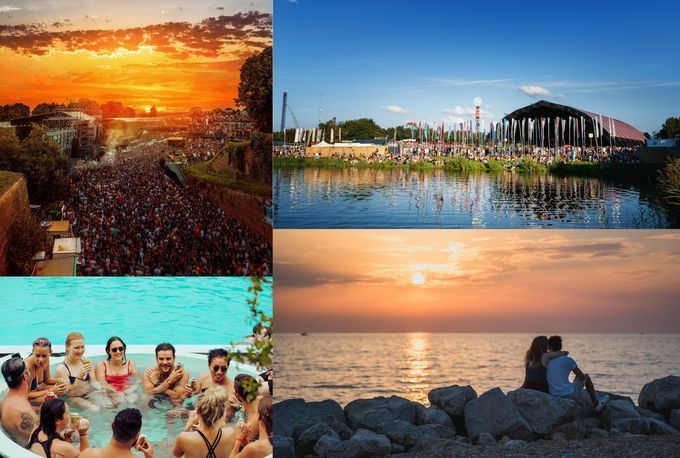 Festivals worth travelling to this summer

Whether it’s discovering new underground acts or indulging a travel buzz, music fans demand an extraordinary experience from festivals these days. A festival no longer means piling into a field for a weekend and accepting the meagre facilities on offer. More often it’s a wallet-friendly trip to a different country, to combine music with local culture, nightlife, sightseeing and gastronomic delights. From partying in a 17th century Balkan fortress or an Icelandic glacier, to pool parties, beach raves or lakeside gigs, there’s something here for everyone.

Sea Star is another coastal dance extravaganza hatched by the experts behind EXIT, so it’s no surprise that it’s been nominated in the Best Medium Sized Festival category in this year’s European Festival Awards – less than two years after its first edition (it was also nominated for Best New Festival last year). Sea Star will return this year to the idyllic Stella Maris lagoon in Umag, Croatia on May 24 and 25, with special opening and closing parties on the 23rd and 26th. With over 70 artists on six stages, from local Balkan heroes to international superstars, Sea Star is an event with high production values in a stunning Mediterranean paradise.  And if you need a time-out from dancing, Umag’s historical Baroque and Renaissance buildings and winding streets are a hive of quaint bars and restaurants. Still, it won’t be long before you’re drawn back to the lagoon with that 4/4 pulse nearby…  Sea Star festival takes place from May 24-25, with an opening party on May 23 and a closing party on May 26.

DOWN THE RABBIT HOLE – WHERE YOU ARE WHO YOU ARE WHEN NO ONE CAN SEE YOU
July 5 – 7 July | www.rabbitresort.nl
Acts Announced: Editors, Underworld, Thom Yorke, Foals, Robyn, Sketpta, The Roots, Vampire Weekend, Aurora, Beruit and many more

A Campingflight to Lowlands Paradise is the Netherlands’ most prestigious music festival that’s been a rite of passage for the Dutch since 1993. It takes place in rural Biddinghuizen – only an hour away from Amsterdam, so there’s even a chance to add in a city break either side.  It’s a true music, arts and culture weekender, featuring the world’s biggest headliners on the circuit, as well as installations, theatre, comedy, film, debates and even science workshops.   Each of the uniquely designed stages are covered so you can party rain or shine, and the iconic ‘Armadillo’ area is the festival’s power station, quirky bars, DJ booths and artisan restaurant areas that surpass regular festival food stalls. The Dutch are world-renowned as expert festival organisers, and Lowlands is a perfect smooth operator, from the intuitive layout to the lack of queues for bars, food and bathrooms – with the best campsite facilities of all the big European festivals.  It’s a proper lost weekend too – Lowlands doesn’t do day tickets, so once you arrive on the Thursday you’re on a journey with your fellow happy campers until Sunday. This vibe was picked up by 2018 headliner Nile Rodgers, who posted: “Lowlands was fire! This was an amazing f-ing crowd! Truly insane, and that’s how we like it!”

Amsterdam is world famous as a hub for nightlife and electronic music, and every October it becomes the centre of the electronic music universe for five days during the Amsterdam Dance Event (ADE).  Some 400,000 people hit the Dutch capital every year for ADE, which features more than 2,500 international artists performing in over 100 of Amsterdam’s most iconic venues including Melkweg, Gashouder, Claire, Shelter, Paradiso, the NDSM Docklands and De School. But it’s not simply a five-day rave – ADE offers an inspirational conference programme that covers all aspects of dance music culture and the industry. By day, across Amsterdam’s five main districts, there are dozens of seminars, workshops, exhibitions, artist interviews, feature and documentary screenings, DJ showcases and tech classes.  Amsterdam Dance Event takes place over five days every October and is the ultimate festival for electronic music fans, who can even learn more about the culture between the parties.