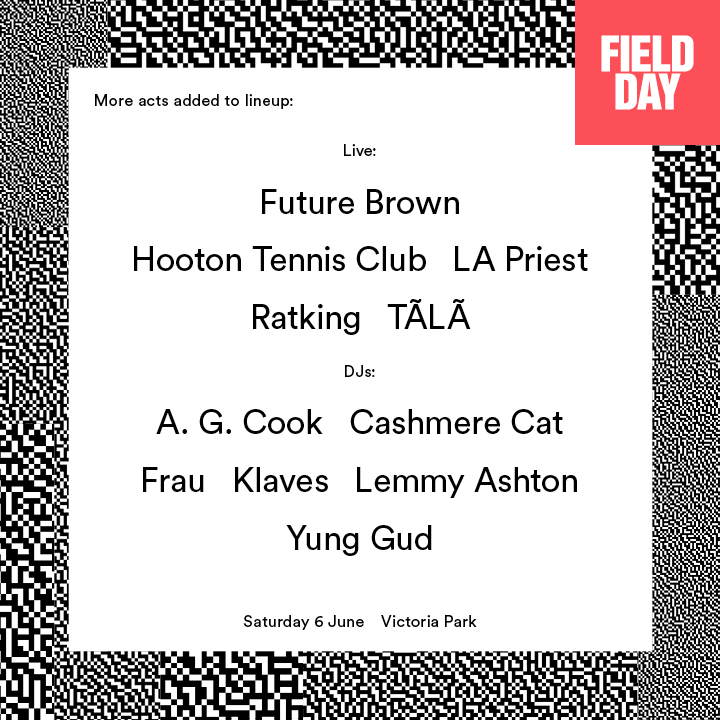 The ninth edition of Field Day will be held at  Victoria Park, in the heart of East London on Saturday 6th and Sunday 7th June 2015.

Field Day are delighted to reveal the new line up additions that will be joining the likes of Caribou, FKA Twigs, Django Django , Run The Jewels, Hudson Mohawke, Chet Faker and Nina Kraviz on the Field Day Saturday 6th June bill.

Field Day are thrilled to welcome the hotly tipped  TÃLÃ for her first ever festival appearance, in a London exclusive, to Field Day 2015. The super talented London based producer/singer/songwriter will bring her mix of Middle Eastern tradition, sultry R&B and atmospheric industrialism to Victoria Park this summer.

Also on board this year is LA Priest, the glorious project from reclusive electronic musician Sam Dust of critically acclaimed Late Of The Pier, who’s anticipated new single ‘Oino’ will be released on Domino this week. Meanwhile, Heavenly-signed Hooton Tennis Club, with their effortless languid lo-fi in the classic Teenage Fanclub and Pavement tradition, have also been added to the Field Day Saturday line up.

Field Day are thrilled to announce more exciting additions to the  Field Day Sunday line up, which so far includes newly reformed seminal shoe-gazers RIDE as headliners, as well as the iconic Patti Smith & her band  (performing her 1975 groundbreaking album Horses), Savages, Mac DeMarco, Gaz Coombes, Hookworms and many more.

Signed to Mogwai’s Rock Action Records, Glasgow’s Errors expertly meld electronica and live elements to create a unique sound that has won them fans from all corners. The first listens of their new album ‘Lease of Life’ is a masterpiece, ably demonstrating a band at their best. A force to be reckoned with live, Field Day can’t wait to have them at their Festival this year!

Also confirmed for the Sunday are psychedelic-pop outfit Cairobi who will bring their shiny, colourful, rhythmically complex and elusively distorted sounds to Victoria Park this summer.

Field Day are very excited to announce new outstanding DJ additions to the Field Day Sunday line up including Beyond the Wizard’s Sleeve the warped-Balearic-psychedelic brotherhood of Erol Alkan and The Grid’s Richard Norris; club night heroes Sonic Cathedral the label in charge of releasing a wealth of records from the likes of Young Husbands, Specres, Vacant Lots…; Heavenly Recordings DJ arm Heavenly Jukebox, who’ve been soundtracking parties and festivals since 1990;  as well as the ever-present and hugely influential artist  DJ, producer, label owner and master remixer (Björk, Happy Mondays etc) Justin Robertson!