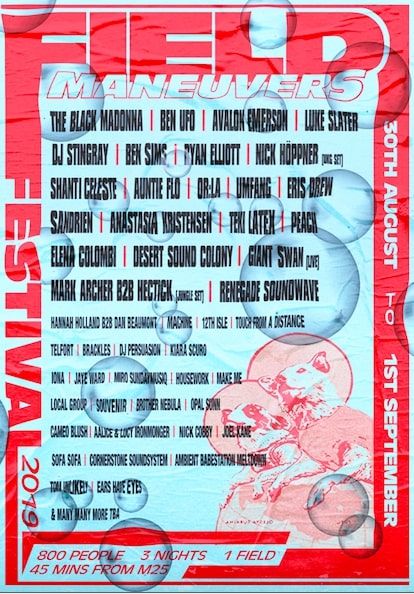 Today, Field Maneuvers announces a whole host of names to the already heavyweight line unveiling Avalon Emerson, Umfang, Elena Colombi, Sandrien as the newest additions to the bill.  They will be joined by a Touch From A Distance showcase from Nick Höppner, a specially curated takeover from Ben Sims’ and his Machine imprint whilst Glasgow based ambient house label 12th Isle will also host a takeover.

Field Maneuvers has adopted the 90’s ethos of rave culture since its inception, creating a inclusive and intimate party over 3 nights in 1 field with only 800 people. New school techno figure and Whities signing Avalon Emerson, will make her FM debut alongside Discwoman cofounder Umfang, a DJ most known for her heavy hitting sets that have allowed her to travel clubs across the globe.

Elsewhere, Elena Colombi, the Italian DJ who has made a name for herself in London with her genre bending record collection. Stepping up from Amsterdam is  Sandrien, a pillar to the Dutch underground techno scene and resident at seminal club Trouw. She will be joined by Holding Hands label boss Desert Sound Colony, whilst Osgut Ton’s very own Nick Höppner heads to FM as he hosts a Touch From a Distance showcase, his most recent musical venture. He’ll invite, Desert Sound Colony, Brother Nebula, Opal Sunn, Cameo Blush & iona to join the takeover, whilst he packs a bag full of garage anthems for his one off UKG set.

With a love for free-parties at its very core, Field Maneuvers is not for profit and run by a dedicated crew of music lovers. It brings together the best quality sound systems, production and stage design, with the much loved Sputnik stage described by Resident Advisor as ‘one of the most unique rave spaces in the world.’ Situated just 60 minutes out of London, it is an easy to reach location and camping is included within the ticket price – all you need to bring is a tent and good vibes. Tickets are already on final release and flying fast, grab them here: http://www.fieldmaneuvers.com/tickets