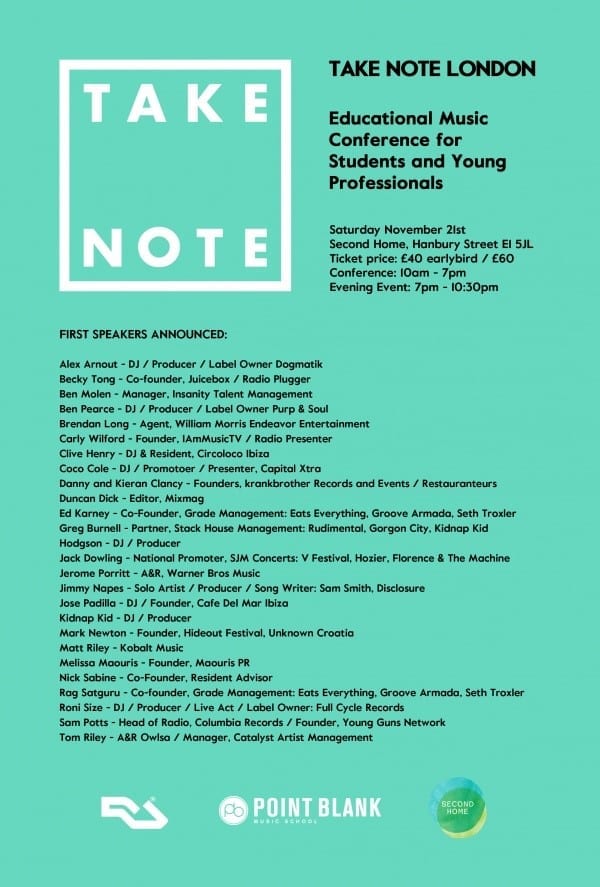 Electronic music is potentially very lucrative but notoriously hard to break into as an industry, with countless new and talented young people seeking their spot in a saturated market. Take Note is a new music conference dedicated entirely to music students and young professionals, with less focus on high-level industry networking and more focus on learning and steering careers in a comfortable, inspiring and inviting environment.

On Saturday 21st November, Take Note will stage its debut event at Second Home, an exciting new cultural venue and workspace for creative individuals in East London that has established itself as a hub for fashion, technology, film, design and music. Designed by renowned architect SelgasCano from Madrid (also responsible for the Serpentine Gallery Pavillion Summer 2015), the space will make use of an intimate auditorium space, in-house restaurant Jago (run by the former head chef of Ottolenghi in Notting Hill) and additional rooms available for meetings and tech demonstrations all day.

Speakers already announced include Jimmy Napes, the producer & songwriter for Sam Smith and Disclosure, Greg Burnell of Stack House Management, the company attached to Black Butter Records who look after Rudimental and Gorgon City, a variety of musicians including pioneering drum & bass star Roni Size and chart-topping house producer Ben Pearce, as well as media moguls including Nick Sabine, the founder and director of leading electronic music website Resident Advisor and Duncan Dick editor of Mixmag magazine, with many more names to be added.

Point Blank electronic music school will stage production masterclasses throughout the day with the leading names in music, and delegates can request a meeting with established music industry professionals as part of the Inspire Or Hire scheme, a rare face to face opportunity to pitch an idea, apply for work experience and make an impression, and a chance for professionals to tap into the next generation. The main conference area will then transform into a live music event space from 19:00 with a special live performance.

Hear from A&Rs, managers, DJs, agents, producers, PRs, journalists, and label managers as the leading lights in electronic music uncover current insights and inside knowledge, encouraging the development of new and existing skills to promote fulfilling and successful careers. Take Note plays a vital role in educating the next generation, those who will inevitably sculpt the future of the industry.