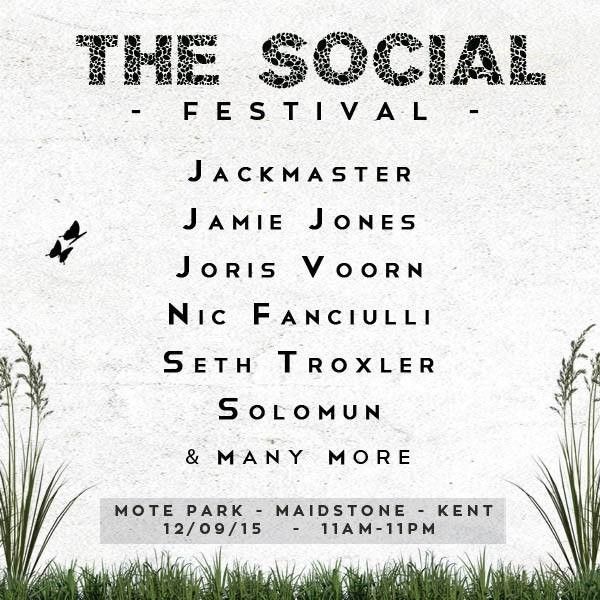 Boutique day festival The Social returns to the beautiful country surroundings of Mote Park in Maidstone, Kent on Saturday 12th September 2015 to showcase a selection of the world’s best house and techno DJs. Following the extraordinary success of their sold out first and second year – which featured the likes of Carl Cox, Seth Troxler, Loco Dice, Carl Craig and Tale of Us – The Social Festival’s 2015 edition looks set to be its biggest to date with early bird tickets selling out in record time.

Having delighted festival-goers with their winter edition which featured the likes of Maya Jane Coles, Dusky and Hot Since 82 and took place at the unique location of The Museum Of Kent life in Maidstone, The Social’s summer edition will bring a slice of Ibiza to the South East of England. Feature a host of international talent from across the house and techno spectrum, the festival will once again, be curated with love by Saved Records label owner and Maidstone local Nic Fanciulli.

Having become one of the world’s biggest DJs, Jamie Jones is confirmed to play The Social for the first time. One of the artists responsible for bringing deep house and techno to the forefront of underground culture, Jamie Jones is a long awaited edition to The Social.

Long term musical ally Joris Voorn is also confirmed to play having toured with Nic regularly and joining forces for last year’s La Familia residency at Ushuaïa Ibiza. He will be joined by Glasgow born Jackmaster, who recently been named DJ Mag’s number one DJ of 2014 in their Best of British poll. He has since relentlessly toured the world’s clubbing capitals with a memorable set blending house, techno, disco, funk and more.

Also returning to the line up from last year’s sell out event is the incomparable Seth Troxler. Having cut his teeth on the illustrious Detroit techno scene in the early naughties, Seth has risen through the ranks to become one of the scene’s most sought after tastemakers. With new production in the pipeline and a plethora of headline shows lined up for the summer, Seth is not one to be missed at this year’s event.

Rounding off the first announcement is Dynamic label boss and underground stalwart Solomun. Having carved a reputation as one of underground music’s leading producers and DJs, the Pacha resident finds the perfect balance between deep industrial techno basslines and soul infused house synths and a welcomed edition to the line-up.

With phase two line-up to be released in April, The Social will be an ideal opportunity to sign off the summer with an intimate and memorable musical experience.