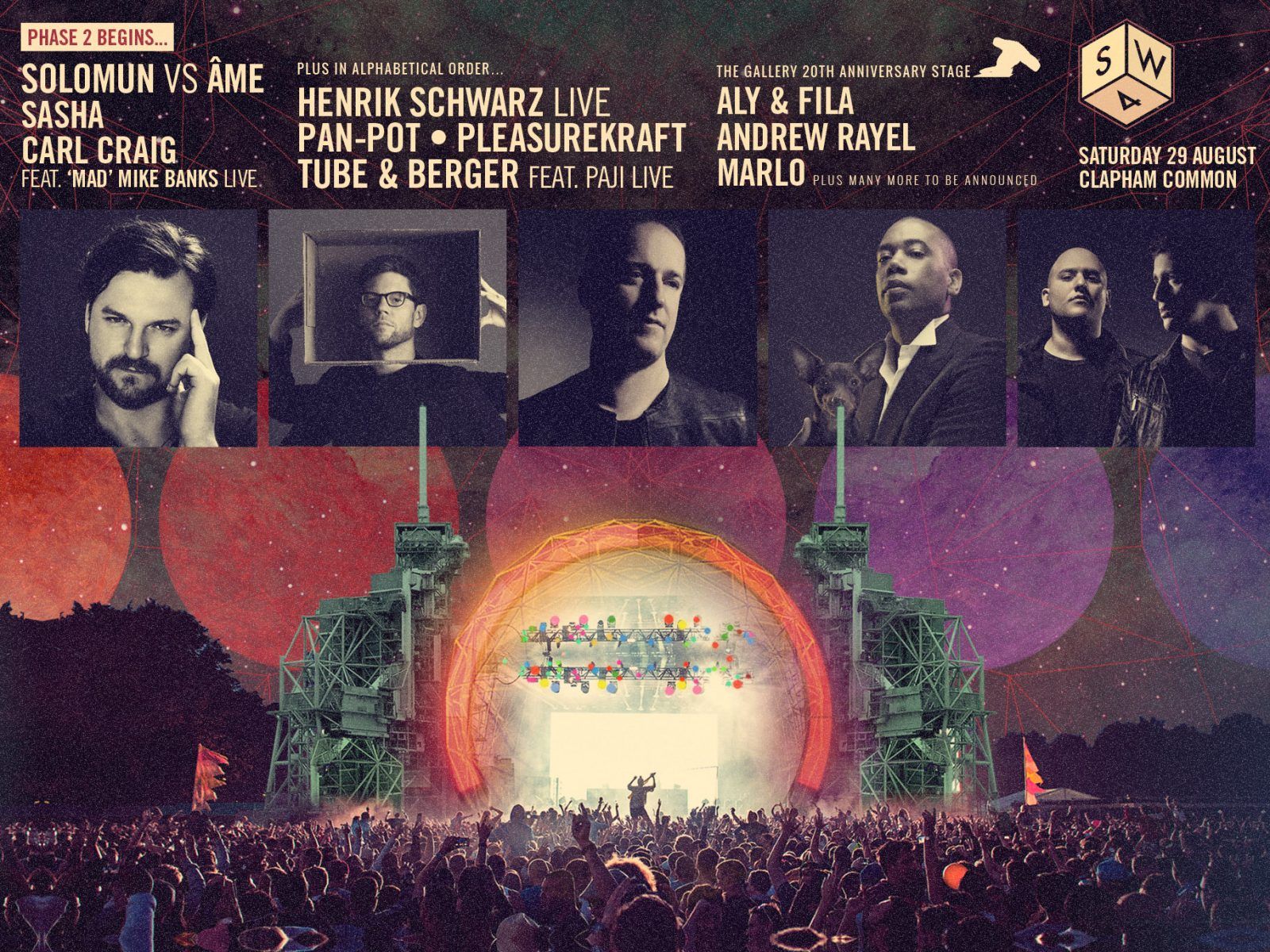 With ten stages set to welcome your favourite headline DJs and live electronic acts to South West London across the August Bank Holiday Weekend, the lineup for SW4 will hit the three figure mark for the first time this year, as we welcome over one hundred artists to Clapham Common.

Nearly forty of those artists were revealed in our ‘Phase One’ announcement, with highlights including headline performances from Faithless, Skrillex, Basement Jaxx, Fatboy Slim, Eric Prydz and Marco Carola, exclusive back to back performances from Gorgon City vs Pete Tong and Green Velvet vs Patrick Topping and live sets from the likes of Dubfire, Sigma, Wilkinson and Jaguar Skills. However the fun doesn’t stop there. Today we commence ‘Phase Two,’ an opportunity to extend the SW4 kaleidoscope yet further, as we welcome another thirteen artists from across the electronic music spectrum…

Two powerhouses go head to head at South West Four this summer as we bring you Solomun vs Âme. This world exclusive set from the label heads of two of dance music’s most loved imprints, Diynamic and Innervisions, represents a performance these shores has never seen before and may never see again. Both Solomun and Âme are no strangers to SW4 having both debuted in 2013 and 2012 respectively. Since then they have gone onto shine bright as two of the leading names in underground house music. 2014 witnessed Solomun continue his trailblazing ‘+1’ residency at Pacha Ibiza and mix the first Global Underground City series compilation in four years, which he devoted to his home city Hamburg. Âme has enjoyed similar success over the past twelve months, culminating in the house juggernaut hitting the #3 spot in the Resident Advisor Top 100 DJs poll of 2014. Collectively we can expect a sublime and emotionally rousing set that will bring together two great minds for a performance none of us will ever forget…

Over the years Sasha has contributed hugely to our history, from headlining the inaugural instalment of the festival in 2004 and then again in 2009, to debuting his own ‘Last Day on Earth’ stage last summer. In 2015 he returns to our main stage for the first time in five years, where he will play directly before Faithless’ huge homecoming live performance. So far this year Sasha has thrilled his fans with the release of his first solo single in four years titled ‘Vapourspace’, which follows in the path of his widely-played remix of London Grammar and collaborations with James Teej and Joel Mull. With the man on a purple patch at present, make sure you come witness the master control his playground as Sasha returns to South West Four.

Two Detroit legends go head to head this summer at South West Four on Saturday 29th August as we present Carl Craig featuring ‘Mad’ Mike Banks Live in a full UK festival exclusive. Having been responsible for one of the standout performances at ADE 2014, the coming together of these two musical innovators makes this one of the most anticipated sets of the entire weekend. Carl is of course no stranger to Clapham Common having brought his ‘Innerzone Orchestra’ to South West London in 2009, followed by a very special DJ set in 2013. With a discography which includes many of techno’s finest moments, Carl has spent the past three decades staying true to the sound he has helped define and his sets are a reflection of the rich musical heritage of the Motor City. He will be joined by Underground Resistance founder ‘Mad’ Mike Banks, who will invoke the jazz-infused techno spirit of his Detroit collective by playing live on keys. One for the heads.

As musicians go, there are few in the world as accomplished as our next act. A true pioneer, we are excited to announce that Berlin-based Henrik Schwarz will make his South West Four debut with an exclusive live performance. As a producer, his ability to bridge the gap between classical and modern-day electronic sounds is unrivalled, whilst as a composer his eclectic approach to composition and sound design is also in a league of its own. On top of a diary bursting with dates in every continent, 2015 also welcomes the release of his latest album ‘Instruments’, which will be showcased live on Clapham Common. Having fought off fierce competition for his brilliance, Henrik is another Innervisions favourite that we can’t wait to welcome this summer.

In just a few short years, the brilliant multi-dimensional duo Pan-Pot have created a dominating presence in the underground scene. As an act we’ve always had on our hit list, we are excited to welcome the Mobilee Records artists to Clapham Common for the first time this summer. 2014 witnessed the pair play the main room at Time Warp’s 20th Anniversary, command leading slots at Awakenings and Mysteryland and deliver stellar performances at Watergate, Elrow, Hyte and Music On. At SW4 Saturday the pair will remind us of their outstanding talents, making them one of the most exciting acts of the day.

Also making their maiden voyage on the good ship SW4 this year are underground giants Pleasurekraft. Originating from Stockholm and Washington respectively, Kalle and Kaveh are two of a kind. Founders of the outstanding Kraftek imprint, the techno-driven duo are regularly found leading the charge at many of the world’s greatest parties. Highlights of 2014 included summer dates at Space’s Elrow, ANTS at Ushuaia as well as at Defected’s and Suara’s Ibiza showcases. With production at the forefront of their agenda, this year has already seen them team up with Tiger Stripes to remix Cajmere’s ‘Satisfy’, whilst their edit of Green Velvet’s ‘Genedefekt’, alongside Carlo Lio, is also set for imminent release. On course to be one of the Saturday’s must-see SW4 debuts, it is one we strongly advise you do not miss.

After the recent sell out success of their Deeper Sessions event at Brixton’s superb auditorium Electric, we can announce that Tube & Berger’s next trip to the Capital will be at South West Four. Playing the festival on Saturday 29th August in their exclusive London summer play, the German-duo will be joined by Kittball label-mate Paji, who plays live. The past twelve months have seen the house and disco favourites continue to add to their arsenal of peak-time weapons with further releases on Defected, Get Physical and their own imprint, all receiving critical acclaim.

THE GALLERY 20TH ANNIVERSARY STAGE WITH
ALY & FILA, ANDREW RAYEL, MARLO + MORE TBA
Ever since its inception back in 1995, The Gallery has become nothing short of a Great British institution. Having started its journey at Farringdon’s infamous Turnmills, 2008 witnessed the UK’s longest running Friday night club event move south of the river to Elephant & Castle’s world famous Ministry of Sound. 2015 marks The Gallery’s twentieth birthday, a milestone seldom reached in clubland. A series of events have been curated to celebrate this achievement which will culminate in spectacular fashion at South West Four on Saturday 29th August, as The Gallery hosts its own arena. Having spearheaded the UK trance movement for two decades, this carefully programmed stage will feature ten of the very best and freshest names in the scene, three of which can be revealed now…

Hailed as The Kings of Egypt, Aly & Fila have become internationally recognised as leaders of the contemporary trance sound. Unrivalled at fusing vintage synths with poignant vocals and tough basslines, their commitment to the genre’s more traditional roots has garnered a dedicated army of global followers. That has been illustrated in the Capital, where they hold court at the Ministry as one of The Gallery’s all-time favourite guests. Last August Fadi delivered a spectacular set to a sun-kissed Clapham Common, whilst 2015 marks Aly & Fila’s return for an even bigger performance.

Tagged as a modern-day Mozart and a leading talent in today’s trance scene, South West Four is delighted to welcome back Armada’s Andrew Rayel. Since finding a solid home on the A State of Trance and Armind Recordings imprints, Rayel’s worldwide demand has grown ten-fold. His last UK performance was at a roadblocked Gallery in December, so we knew we had to get him back to SW4 for a summer display of his much-lauded sounds. With support flocking in from all his peers including Armin van Buuren, Above & Beyond and W&W amongst others, Andrew is well on his way to adding himself to the trance hall of fame. SW4 please rise…

Signed to Armin van Buuren’s Armada Music, we are pleased to welcome one of trance’s hottest rising stars to SW4 for a rare UK performance. Having made an outstanding impression at The Gallery in early 2014, we can’t wait to welcome MaRLo back to London. Voted Australia’s #1 DJ thanks to a string of popular euphoric productions that have ridden high in the Beatport Top 10, Dutch-born, Australian-raised MaRLo joins the SW4 bill on the best form of his career. With standout deliveries at ASOT 700, EDC Mexico and Ultra already under his belt for 2015, we simply know he won’t disappoint.

TWO MORE SW4 SUNDAY HEADLINERS ANNOUNCED NEXT WEEK!
The SW4 headliners have come thick and fast over the past few weeks with Faithless, Fatboy Slim, Eric Prydz and Luciano announced so far for the Saturday and Skrillex, Basement Jaxx, Marco Carola and Loco Dice for SW4 Sunday. However our huge lineup announcements don’t stop there. Next week we will be revealing a further two headline artists who play our main stage on 30th August. The first is an SW4 legend who returns to Clapham Common this summer to debut his new alias in a full UK festival exclusive. The second is an artist who has taken the dance scene by storm in the past couple of years, selling out arenas across the world in the process. Keep your eye on our social networks over the coming days where we will disclose the full details as to when these exciting lineup additions will take place…