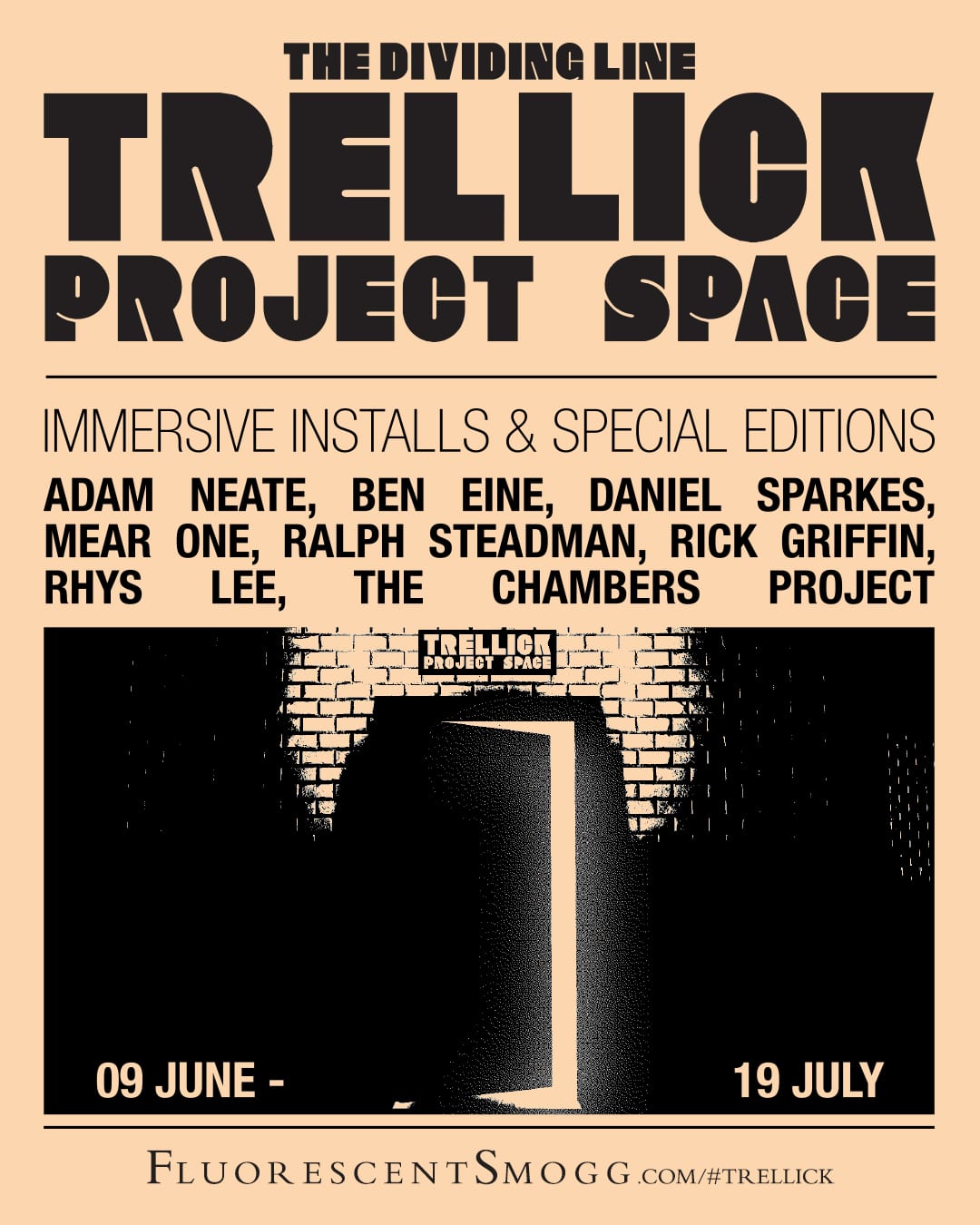 by ihouseuadmin
0 comments
Not content with creating the world’s first group show in a groundbreaking virtual gallery space, Fluorescent Smogg is now proud to launch the Trellick Project Space, a Project Space within The Dividing Line show that will feature artist takeovers, bespoke pieces and limited edition works from a host of special guest artists.
Fluorescent Smogg’s Charlie Baird says: “The Dividing Line has been a great success. We’re now extending the duration of the entire show and are delighted to welcome Ben Eine, Ralph Steadman, Rick Griffin, Rhys Lee, Daniel Sparkes, Mear One & Adam Neate into this dynamic space”.
Each week the Trellick Project Space will transform in shape and structure and shift focus onto a specific artist or collection. It will feature brand new, never-seen-before work and see collaborative editions released — all produced by Fluorescent Smogg, alongside the artist, to its usual impeccable standards.
Set to feature screen prints, hand cast bronzes and much more, upcoming Editions will be strictly limited, available only via Fluorescent Smogg and across all price points to suit all collectors. And, as with every sale in The Dividing Line, 10% of profits will go straight to a relevant registered charity chosen by the artist.
Charlie Baird adds: “The Trellick Project Space will completely change with each new takeover and become a focused showcase, allowing us to shine even more of a spotlight on some incredible artists’ work. It will also give us a platform to launch some of our newest collaborative pieces with the likes of Ralph Steadman, Rick Griffin, Rhys Lee and Adam Neate, and raise even more money for charity”.
Visitors can also expect exclusive DJ sets, artist curated content, design collaborations and more across the coming weeks.
Visit The Trellick Project Space here from 2pm today – Tuesday 9th June.
ARTIST SCHEDULED:
9th June – Daniel Sparkes Takeover and Print Release
16th June – The Chambers Project Takeover including:
16th June – Ralph Steadman Bronze and Print Edition Releases
18th June – Rick Griffin Print Release
25th June – Mear One Print Release
30th June – Ben Eine Takeover
7th July – Adam Neate Takeover & Print Release
14th July – Rhys Lee Takeover and Print Release
FURTHER ARTIST & SHOW INFORMATION:
9th June – Daniel Sparkes
Beginning with a takeover from Daniel Sparkes, juxtaposing the room’s brutalist reality with surreal, cartoon abstractions and releasing a stunning Giclee print “Panthos Vipering Trails” with spot varnish details and deckled edges, signed and numbered by the artist.
Donations to: Stand Up To Racism UK
16th June – The Chambers Project – Ralph Steadman, Rick Griffin, Mear One
Following that we hand the space over to The Chambers Project, the Nevada City Collective will be displaying works from their extensive collection of some of the world’s finest psychedelic art. As the works on display actively encourage the viewer to seek a different headspace, it would only be fitting that the room itself plays with the perception of what a gallery space can be…
Edition pieces here will include stunning hand cast Bronzes and Screen Prints from pioneers in the (left)field Ralph Steadman & Rick Griffin; plus an exclusive 8 colour, hand finished Mear One Screenprint.
30th June – Ben Eine
Next up we have a true pioneer of letterform, Ben Eine.
Featuring new and classic canvases, a brand new take on a classic shop shutter, and a few more surprises, Ben’s takeover is bound to be something special.
7th July – Adam Neate
Adam Neate will use the space to further explore Interdimensionally in his works and the space itself to a new level. Adding more paintings and drawing and showcasing some of his 3D VR works in the space, we will also be releasing a signed, limited collaborative Screenprint.
14th July – Rhys Lee
Acclaimed Australian visual artist Rhys Lee takes the space over next showcasing more of his incredible canvases in a space that reflects and amplifies his artistic process. A very special, brand new, signed screenprint edition will also be released via Fluorescent Smogg during this final takeover. 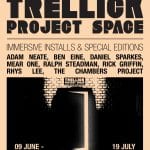