Full DJ line up confirmed for ANTS at Brixton Academy 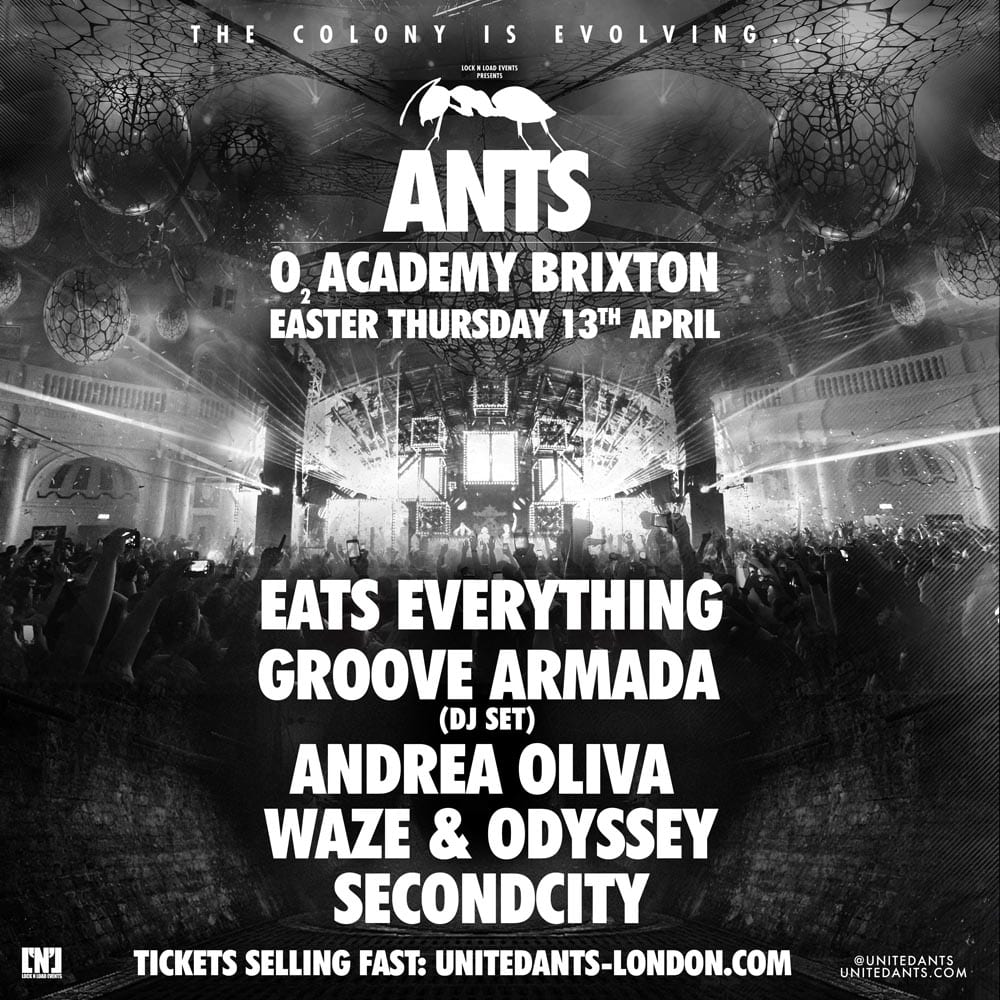 Full DJ line up confirmed for ANTS at Brixton Academy

ANTS have announced the full line up for their biggest international event yet at 02 Academy Brixton on Easter Thursday 13th April.

With Eats Everything and Groove Armada already confirmed as headliners, ANTS have announced that resident DJ, Andrea Oliva, will be joining them, backed up by house music stars Waze & Odyssey and Second City.

Andrea Oliva has been the host and resident DJ of ANTS since the club launched at Ushuaia, Ibiza in 2013. In 2016, Andrea played an all night set on the Space Terrace for Elrow, made his debut appearance at Music On with Marco Carola, and played at many festivals including SW4, Creamfields, We Are FSTVL, Electric Zoo, and Parklife, whilst maintaining his famed ANTS headliner commitments.

His skill for crafting stand out sets attracted the attention of Pete Tong, who helped Andrea to make his Essential Mix debut with a set recorded live from Ushuaia. After an incendiary back-to-back between the two DJs at the All Gone Pete Tong Miami Music Week pool party earlier in the year, Andrea was also a natural choice to mix the All Gone Pete Tong Ibiza 2016 compilation alongside the influential broadcaster.

Waze & Odyssey aka Serge Santiago and Firas Waez joined forces in 2011 to launch W&O with releases on Wolf Music, Let’s Play House, and Tsuba as well as their own heavily championed W&O Street Tracks. Their bootleg of R Kelly’s ‘Bump ‘N’ Grind’ was picked up by Sony in 2014 and charted at No. 3 in the UK.

Second City was born in the UK but raised in Chicago and has a pan-Atlantic outlook on house and techno. Following releases ‘The Story’ EP on Huxley’s Saints & Sonnets label in 2013 and ‘I Enter’ on Dirtybird in 2014, his follow up track ‘I Wanna Feel’ was picked up Mistajam’s Speakerbox label and charted at No. 1 in the UK. This was followed by releases on Defected, Suara, Saved, Circus, and ensuing festival dates at Glastonbury, Reading & Leeds, SW4, Creamfields, Pukkelpop, The Social, plus an Ibiza residency for Tribal Sessions at Sankeys.

Eats Everything is renowned for his light-hearted approach to deejaying that never fails to engage the crowd. A regular colony member at Ushuaïa Ibiza – and also confirmed to appear at the ANTS stage at Snowbombing Festival – his appearance at Brixton follows a UK tour that called upon his Bristolian roots and covered a number of intimate gigs in towns and cities in the West and Wales. Eats Everything launched his very own Edible label back in 2015 and made his debut EP release with ‘Girl Powder’ last October.

Few producers in the history of dance music have made such a rapid and far-reaching impact on the electronic music scene as Eats Everything aka Daniel Pearce. This larger-than-life beat maker is at the forefront of a swathe of talented producers to come out of the West Country bass epicentre known as Bristol, defining an entirely new strand of forward-thinking underground music.

Groove Armada have been at the forefront of house music for 2 decades and equally happy playing big stages or sweat-soaked basements. Their breakthrough releases, the downtempo anthem ‘At The River’ and million selling album ‘Vertigo’ has led to the act releasing 7 studio albums to date plus a Fabric Live album in 2016.

One of Ibiza’s most respected electronic music gatherings, ‘The Colony’, as it is known to its legions of supporters, will invade London’s 02 Academy Brixton for its second party in the capital, following its sold out show at Electric Brixton in February 2016.