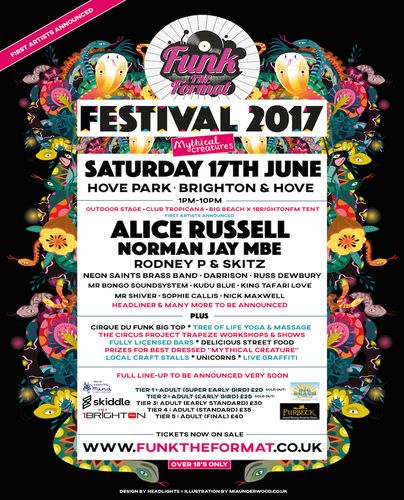 Following their hugely successful debut festival, Funk The Format is back with a bang for 2017. While FTF are still to announce their headliner and many more artists in the coming weeks, they’ve managed to already secure an exceptional line-up for the tree-lined, central setting of Hove Park.

Confirmed so far is super talented British soul singer Alice Russell who, after playing Glastonbury festival last year, is set to make a huge return with new music on the way.

“I’ve decided to come out of my cave and play a select few festivals this year, as I’m concentrating on making new music and raising my two beautiful babies. Funk The Format Festival had to be one of them as I love what this all-female team are doing, plus it’s in my manor!”- Alice Russell

Meanwhile, much-revered DJ, producer, promoter and broadcaster, Russ Dewbury will be spinning a jazz-heavy lean across a spectrum of sounds (tropicalia, disco, funk, Latin, hip hop, soul to name but a few) and King Tafari Love Soundsystem will be spreading feel-good reggae vibes.

All the music is carefully selected by the festival’s director, ex music journalist Lucy ‘Elle J’ Small- known in the late nineties and early noughties for writing about artists like Amy Winehouse, Dizzee Rascal and Ms Dynamite before they were signed. As a champion of new music, Elle J is super excited about the little-known foursome Kudu Blue and quickly booked them to play the main stage with their “nostalgia tinged influences, from 90's trip-hop to 00's garage”

For all the lastest news and tickets (over 18s only): www.funktheformat.co.uk