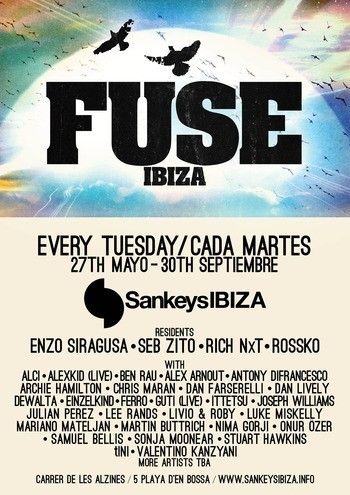 FUSE London is gearing up for their sixth consecutive summer on the White Isle, and given last year’s success, the UK based imprint and event series is set to be a definite in holidaymaker’s Ibizan clubbing program. Returning to their original night of Tuesdays, FUSE Ibiza will launch on 27th May and run for 19 weeks until 30th September.

As ever the party will focus on the group of residents including head-honcho Enzo Siragusa, Rich NxT, Seb Zito, and Rossko that have helped shape the special sound and vibe of the hugely successful London event series. But of course, with it being Ibiza, there will be a selection of friends of the party such as tINI, Guti, Martin Buttrich and Sonja Moonear playing at various points over the summer to add a different perspective on proceedings.

Additionally there will all also be three residents parties, two INFUSE Label parties which will highlight some of the core artists on FUSE London’s sister label, and Julian Perez with the talented Livio & Roby will be on hand as FUSE meets FATHERS AND SONS for a special one off event. And as in previous years it is unlike FUSE to play all their cards at once, so expect some special surprises over the coming months.

As ever, FUSE will continue to be heavily focused on the sound. Audiophiles by nature, the team behind FUSE are dedicated to ensuring that the set up of any club they play is tweaked to allow for the best representation that distinctive Fusic sound. Hence the return to Sankeys, where the low slung ceilings and the finely tuned soundsystem combine to create the perfect atmosphere for which FUSE to thrive.  It appears then that FUSE is set to continue its assault on the White Isle this summer.

Date:
Tuesday 27th May, and every following Tuesday until 30th September