Robbie Rivera & David Tort - Get Together 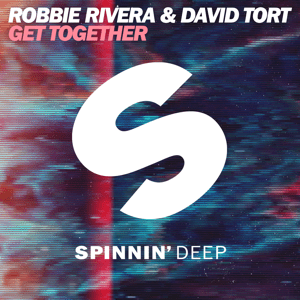 Robbie Rivera & David Tort - Get Together

It's a match made in house heaven as Robbie Rivera and David Tort have teamed up for their brand new single 'Get Together'. Already backed by major DJ support (including Groove Armada, Lost Frequencies and Fedde le Grand showing their love), it's officially out now through Spinnin' Deep.

Robbie Rivera can be considered one of house music's living legends, working up a worldwide reputation since the late 90s. Hailing from Puerto Rico, residing in Miami, he's released a string of club hits, EPs and albums since then, released on labels like Spinnin' Records, Subliminal, Axtone, Dim Mak and his very own Juicy Music.

Teaming up with David Tort seems like the perfect combination, as Tort surely is one of the most influential Spanish artists in the global electronic music scene. Performing all over the world, releasing tons of impressive tunes on labels like Spinnin' Records, Size, Cr2, DOORN and Musical Freedom, teaming up with and remixing for a wide range of artists.

'Get Together'
So, what do you get when two of these house veterans get together? Well, a record dedicated to the club floor, or as they like to say 'pure underground house'. And that's what it is, 'Get Together' breathes all the ingredients of an instant classic, underlining both artists' talents to create dance music that will stand the test of time anywhere.

"We've been looking for a grown up sound – a track for clubs as they were before, but made for today. That track that you save for the perfect moment and you really wanna play. We just wanted it to sound like we think David Tort & Robbie Rivera should sound together, today." – David Tort

"David and I have known each other for a long time and we both love the tribal house sound. I had this full vocal song and passed it to David while hanging in Miami and he ripped a chunk of it and we added drums and a simple dark synth melody. Less is better was the formula. This is pure underground tribal house." – Robbie Rivera

Robbie Rivera & David Tort – ‘Get Together’ – Out now on Spinnin' Deep
https://spinnindeep.lnk.to/GetTogether