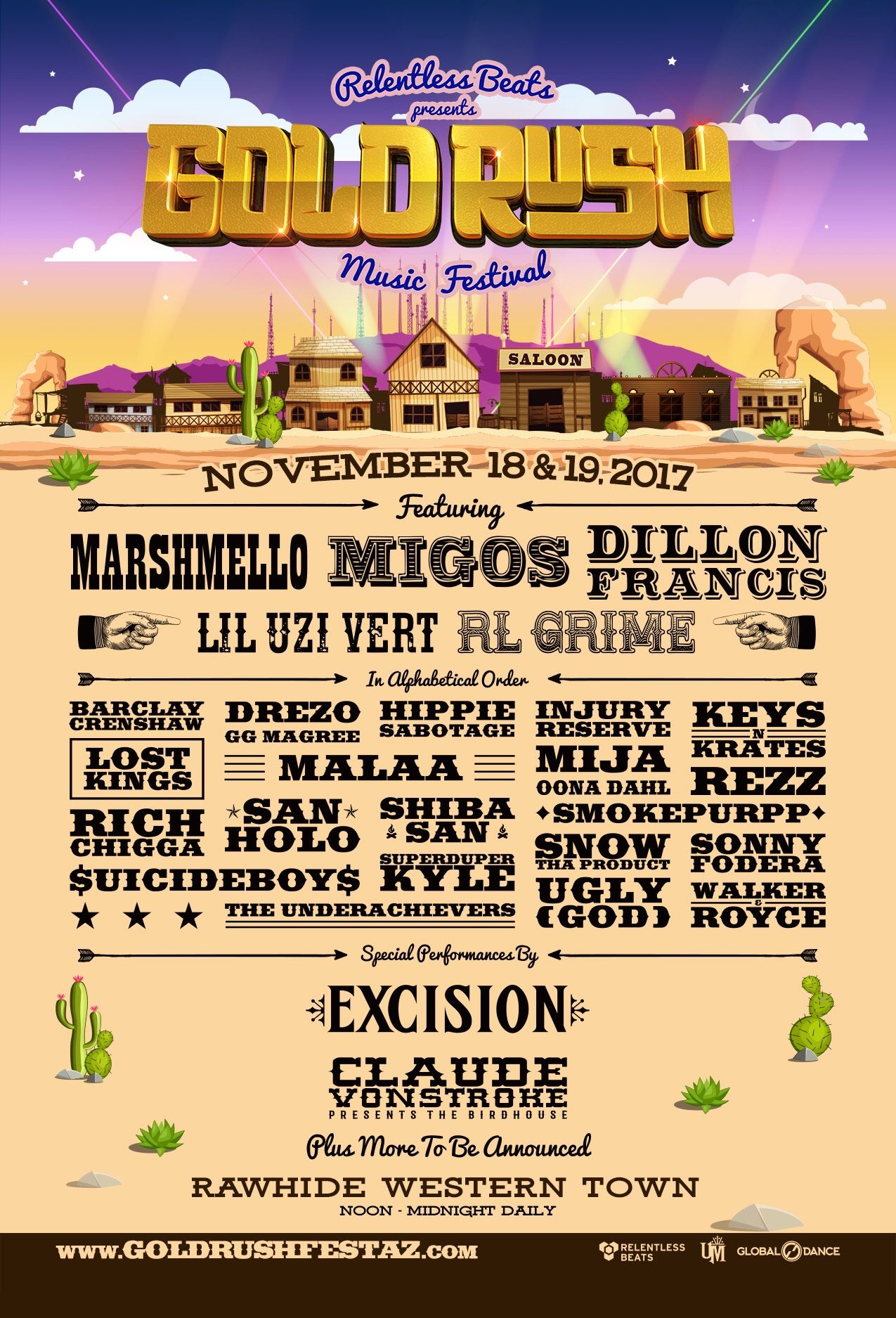 Two weeks after Relentless Beats announced Goldrush Music Festival – a brand new experience heading to Arizona this November 18 and 19, the Phoenix based dance music and EDM promoter has released the first phase of its lineup for the Wild West concept. Taking place at Rawhide Western Town in Chandler, Arizona, Goldrush will be welcoming electronic dance music and hip-hop prospectors from across the country with some of the biggest talent from around the globe. The first round of headliners for this new, fully immersive two-day festival will include: Marshmello; Migos; Dillon Francis; Lil Uzi Vert and RL Grime.

Featuring four stages, each with its own distinct musical focus and vibe, Rawhide Western Town will be transformed for Goldrush making it a truly one of a kind experience. Recently announced artists on the 2017 performer lineup include: Barclay Crenshaw; Drezo; GG Margree; Hippie Sabotage; Injury Reserve; Keys NKrates; Lost Kings; Malaa; Mija; Oona Dahl; Rezz; Rich Chigga; San Holo; Shiba San; Smokepurpp; Snow thaProduct; Sonny Fodera; SuperDuperKyle; $uicideboy$; Ugly God; The Underachievers and Walker & Royce.Goldrush will also include special performances by Exicision and and a curated stage by Claude VonStroke, aptly named ‘The Birdhouse’. A second round of artists and will be announced in the coming weeks.

“It’s exciting to create a brand new concept for our fans here in Arizona,” says Relentless Beats founder Thomas Turner. “So many events out there follow a tried and true formula, but Goldrush is forcing us to get creative and deliver the best possible experience.”

General Admission passes for Goldrush Music Festival are on sale now for $139, before fees. VIP passes will be available at two levels: Standard VIP, including everything that a GA tickets provides, plus express VIP entrance, a commemorative lanyard, access to VIP lounge, access to VIP viewing deck, premium restrooms and passed desserts in the VIP areas. Gold VIP includes everything that the Standard VIP pass includes, plus: complimentary drinks, side stage viewing at the main stage, access to artist hospitality lounge, steakhouse quality dinner, exclusive festival gift bag and festival concierge. You must be 21+ to purchase Gold VIP passes. All details and ticket types are available online at www.relentlessbeats.com. Goldrush is an all ages event. Fans under the age of 18 must be accompanied by an adult.

Goldrush is produced by Relentless Beats, Universatile Music and Global Dance. Visit www.goldrushfestaz.comfor the most up-to-date information. Stay connected on Twitter and Instagram at @GoldrushFestAZ and on Facebook at www.facebook.com/GoldrushFestAZ.