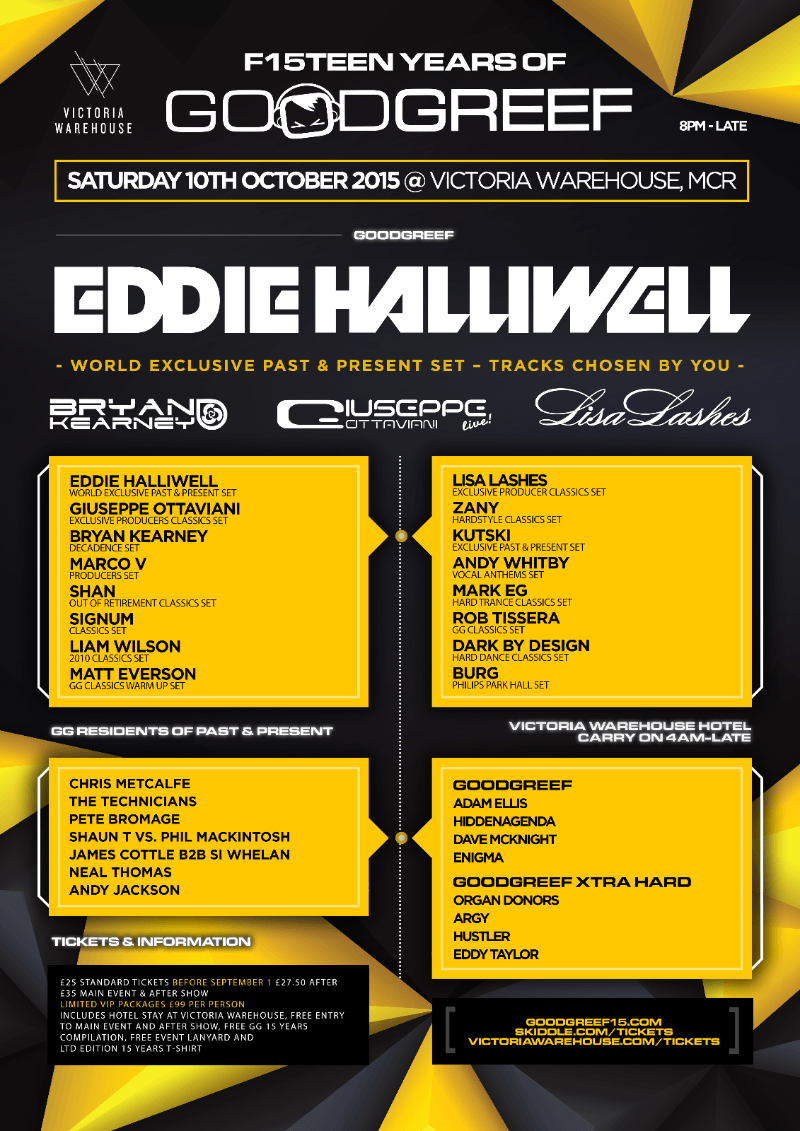 In a throwaway culture where club nights, genres and even DJs themselves come and go literally overnight, to build a brand that not only stands the test of time, but becomes synonymous with an entire movement is a seriously impressive feat. Fifteen years ago, Goodgreef did exactly that and has been building on its historic legacy within the trance and hard dance scenes ever since.

On October 10th, the infamous yellow logo that has toured every major city in the UK, has been voted Mixmag’s “Club Of The Year”, has booked the likes of Hardwell, Tiesto, Paul Van Dyk, W&W, Sander van Doorn, Paul Oakenfold, Showtek, Headhunterz and the Tidy Boys, and has helped forge the globally-successful careers of Eddie Halliwell, Alex Kidd and Jordan Suckley, will be returning to the place where it all started for a birthday party like no other.

For the first time ever, Goodgreef will be taking over Manchester’s legendary Victoria Warehouse and Hotel with a line-up that represents an incredible 15 year journey and reads as a “who’s who” of Trance, Hard House and everything in between.

Backs have been scratched and strings have been pulled in order to bring together more than 30 of the scene’s biggest names, WORLD EXCLUSIVE sets from Eddie Halliwell who will be spinning an exclusive ‘Past & Present’ set and a ‘Producers Classics’ set in the Xtra Hard Room from Lisa Lashes, one OUT OF RETIREMENT set from Shan, 15 extra special birthday sets curated specially for the party from the likes of Marco V, Kutski, Mark EG, Giuseppe Ottaviani, Bryan Kearney, Zany and Rob Tissera, an after party at the Victoria Warehouse Hotel and so much more.

Three rooms and one massive warehouse: all it needs now is you!

Not content with having just the one birthday bash though, Goodgreef and its naughty little brother, Goodgreef Xtra Hard, will be celebrating in style across the globe with warm up shows in Belfast, Dublin and Bournemouth, arenas at Creamfields, High Definition Festival and Mint Festival, an appearance at Privilege in Ibiza, and a ‘Past, Present & Future’ GG15 album due to land in September.

With four months warning, you’ve got no excuses…  Goodgreef will see you in Manchester.