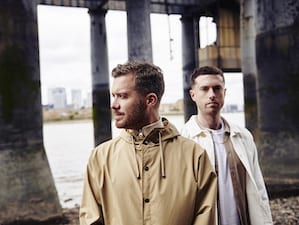 The Yacht Week, the unique ‘floating festival’, has confirmed renowned UK duo Gorgon City will play on 'The Buzz', the world’s first floating DJ stage, fully equipped with 360 degree VOID Acoustic soundsystem. One of the most in-demand acts in electronic music, Gorgon City are known for their blend of bass-driven house and addictive vocals. They take to the water on week 24 of The Yacht Week (10th June) on the Croatia Original route, and for those who will miss out on this experience, The Yacht Week have teamed up with Mixmag once again (following the stunning DJ set from Claptone last summer) to provide an exclusive stream of Gorgon City’s DJ set, available on Mixmag’s YouTube channel. Gorgon City join a selection of world-class DJs already confirmed to play ‘The Buzz' as part of The Yacht Week’s huge summer line up, including Monki, Melé, Mark Knight, Weiss, Illyus & Barrientos, and Offaiah, with even more to come. The Yacht Week is on a mission to put quality, credible music at the core of an unforgettable travel experience, bringing like-minded people together in a flotilla of yachts. A yacht for six friends with a skipper starts at just €550 EUR / $639 USD / £482 GBP per person from www.theyachtweek.com.

The North London combination of Kye ‘Foamo' Gibbon and Matt ‘RackNRuin' Robson-Scott, have been deeply rooted in electronic music since they burst onto the scene in 2012 with their debut production on the highly respected Black Butter Records. Their upward trajectory continued and the pair have built a global following through electrifying live performances and an endless stream of top-charting releases. With the creation of their ‘Realm’ imprint, they have created an underground outlet that allows them to touch both sides of the fence, building an enviable reputation across the electronic music world.

Alongside the unique vibes of ‘The Buzz', party people who join The Yacht Week can enjoy more big nights and underground events when they dock, in conjunction with some of Croatia’s best venues and clubs. When the nightlife takes a break, The Yacht Week lets guests recover with programming that includes seaside yoga, snorkelling in secluded bays, the freshest food, beach lounge relaxation and much more.

The Yacht Week is the original ‘floating festival; a yearly event since 2006, and continues to bring music lovers together for a completely different travel experience, set in six destinations around the world.