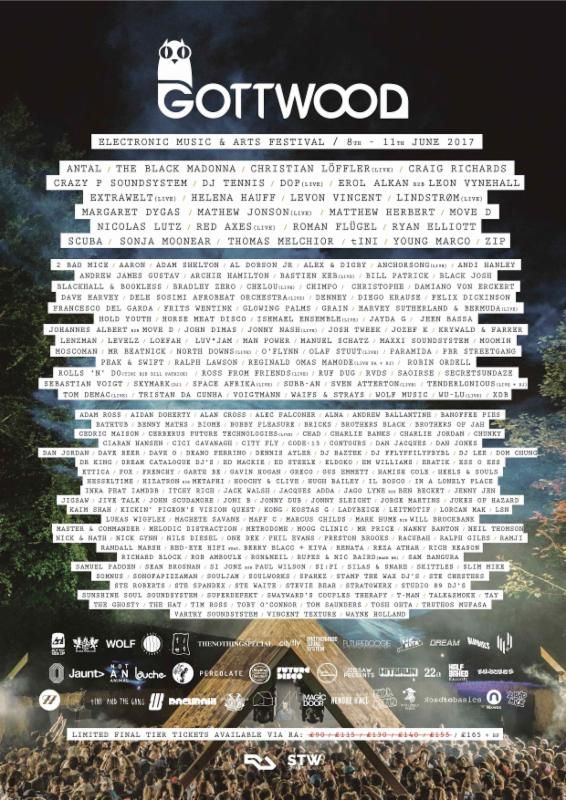 Gottwood are proud to announce a number of new additions to the already extensive 2017 line-up. The new set of artists join the bill alongside the likes of Antal, The Black Madonna, DJ Tennis, Roman Flügel, Helena Hauff, Red Axes and Craig Richards this June.

Joining the Gottwood family in the Welsh forest will be the prolific house and techno purveyor Tom Demac, who is returning to his native Wales showcasing his innovative live show. Hotflush proprietor Scuba will also be joining the fold alongside Cologne's Damiano von Erckert, very few match Gottwood's ethos of smiles-on-faces music more than the German and his set promises to be a Gottwood favourite. Co-owner of Beste Modus and fellow German Diego Krause also joins the bill.

Gottwood are pleased to invite John Dimas to the party again in 2017, a fast-rising star last year but now a master of avant-garde house and techno, whilst another master of his craft Andrew James Gustav is welcomed to an intimate corner of Welsh woodland.

Bringing a touch of experimental left-field pop will be Bastian Keb (originally performing a DJ set) and his full live band. Expect eerie, soulful, psychedelic tinged hip hop fashioned from borrowed and battered instrumentation – a set not to be missed.

Having grown in stature over the past few years to become steadfast members of the international circuit, Gottwood welcomes back Futureboogie's Maxxi Soundsystem and Tribal Sessions' Jozef K to the forest. Fellow Futureboogie signee Christophe joins the bill alongside festival favourite
Move D, who will be going b2b with Frank Music head honcho and multi-genre, multi-monikered Johannes Albert.

Frankfurt's bustling scene gets an airing in the Welsh countryside through Robert Johnson resident Manuel Schatz and his GOSU store partner Phil Evans, whilst Bonafide U.K. diamond and NTS big-hitter Mr Beatnik will grace the woodland along with Fuse resident Archie Hamilton.

Fresh from winning DJ Mag's Best Boutique Festival at the 2016 Best of British awards, this years instalment is set to be one of the stand out events on the festival circuit.