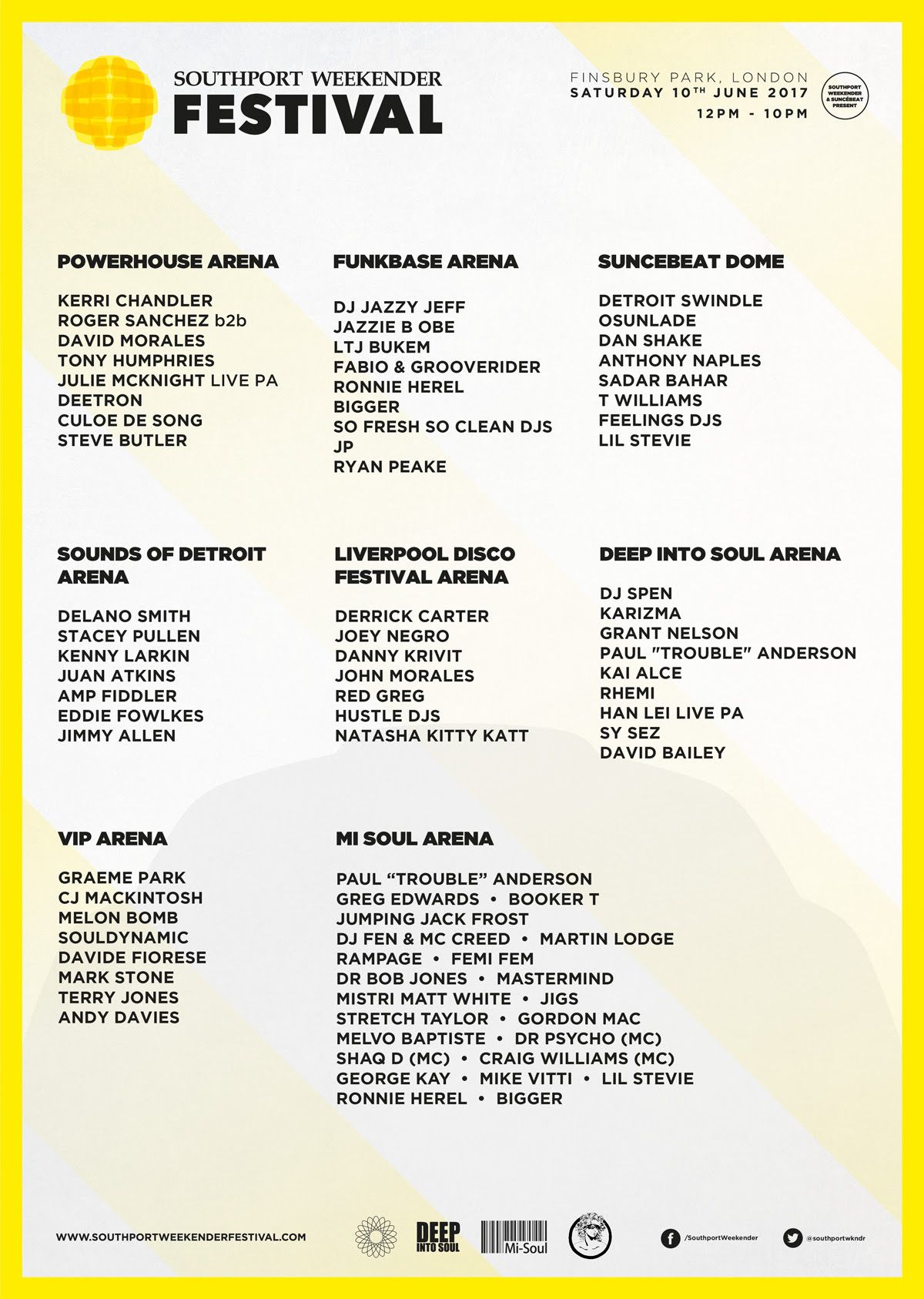 The celebrated event brand will curate 8 stages of music for their debut London festival, offering the very best in house, soul, disco, R&B and garage.

After announcing their very first London festival, the reinvigorated Southport Weekender has now released the line-ups for their 8 covered arenas at this year’s one-day event – set to take place on Saturday 10th June at Finsbury Park.

Curated with meticulous attention to detail and a passion for the music Southport Weekender has championed throughout their 30 year reign, the arenas will showcase the very best in house, soul, disco, R&B and garage with an eclectic mix of genre pioneers and ones to watch. The festival’s signature main stage ‘The Powerhouse Arena’ will bring together heavyweights of world house from South Africa, Europe and the US, with Kerri Chandler confirmed as headliner. A rare b2b set from Roger Sanchez and David Morales is also scheduled, plus slots from Tony Humphries, Culoe De Song, Deetron and Julie McKnight, who will be performing live.

The ‘Funkbase Arena’ sees DJ Jazzy Jeff at the helm, backed by an array of respected artists that will represent all things soul, funk, hip-hop, R&B, UK Garage, D&B, Jungle and acid. Soul II Soul founder Jazzie B OBE and LTJ Bukem are amongst those on the bill, with London party starters So Fresh So Clean on hand to lay down a nostalgic set from the 90's and noughties. The festival’s iconic ‘SunceBeat Dome’ – named after its Croatian counterpart – will present an exciting range of cutting edge DJs of the moment such as Dutch duo Detroit Swindle, Osunlade and Dan Shake, while stalwarts of Detroit’s legendary sound will takeover the ‘Sounds of Detroit’ arena with a wealth of musical heritage on display. Reading as a who’s who of legends from the scene, Delano Smith will be joined by Stacey Pullen, Kenny Larkin, Juan Atkins, AMP Fiddler and Eddie Fowlkes for an unmissable exploration of deep house and techno.

Celebrating the hugely popular North West event, the ‘Liverpool Disco Festival Arena’ brings everything disco to the London Arena – embodied in Derrick Carter and Joey Negro to name a few – with the ‘Deep Into Soul’ Arena set to do exactly what is says on the tin as Southport Weekender welcomes some of the finest house DJs to play in this London residency hosted Arena. Creator of Kiss FM and now head honcho at MI Soul Radio, Gordon Mac brings a hugely diverse and soulful arena to Finsbury Park for his MI Soul showcase with the whole team in attendance – acts such as Paul “Trouble” Anderson, Greg Edwards, Jumping Jack Frost and many more are scheduled. Rounding off the latest announcement is the VIP Arena, which will see Graeme Park, CJ Mackintosh and Ibiza party crew Melon Bomb provide its soundtrack.

With every single arena covered, Southport Weekender is set to be a party to be remember come rain or shine. Adored for its diverse line-up and clientele, its debut green-field festival is set to be an uplifting addition to the UK party calendar – but with tickets now on third release, you’ll need to act fast to secure your spot.