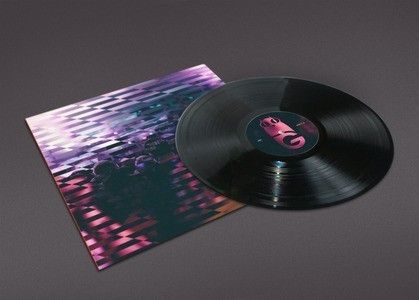 This May Gottwood Festival steps away from the boundaries of running an intimate electronic music festival, and release the first in a series of limited-run 12-inch EPs. In true Gottwood spirit the brand has launched its own label, Gottwax, and confirmed that the annual releases are aimed at showcasing the best of the talent from the previous year’s festival.

Since its conception almost five years ago Gottwood’s policy has been to stay small and wholly independent, but to curate a festival that showcases the top artists across the electronic music scene as well as being a platform for up and coming musicians to perform – note Disclosure, TEED, Max Cooper​, Koreless, Bondax ​and many more all played prior to breaking out.

The move towards releasing a physical record seemed like a natural step, Tom Carpenter co-founder of Gottwood confirmed: “Running a label is something we’ve always dreamt of – with our fifth birthday looming, now seemed like the perfect time to branch out. We have always been 100% focused on running the festival, but we thought that expanding on our ideals and putting out a record would allow us to help the artists, who have helped us for the last few years, gain further exposure.”

Gottwax’s inaugural ‘Gottwax EP1’ is a 180-gram heavyweight record limited to 300 copies, it has been compiled in conjunction with Nixwax and features exclusive tracks from BEHR, OJsmooth, Rob Amboule and eLDOKO – all of whom appeared on the Nixwax stage at last year’s Gottwood Festival.

Frankfurt’s BEHR provides the lead track which lies somewhere between the boundaries of techno and house. The infectious lead vocal will have those who attended last year’s festival a little nostalgic when their subconscious is suddenly reminded of the then-unreleased track that was ringing out over the lake stage on Sunday. OJsmooth the incredibly talented and genre-defiant beatsmith provides a tough analogue sounding club track that again leans towards house and techno. On the B-Side Rob Amboule, who has recently released tracks on 2020 Vision delivers a 1990s-themed house throw back, and Gottwood’s own eLDOKO brings the record to a close with a unique down-tempo afterhours track.

To celebrate the launch of the label Gottwood are taking over London’s Corsica Studios on April 11 for The Gottwood Gottwax Label Launch. Nixwax are controlling room two with the help of BEHR and OJsmooth, and Gottwood are taking the reins of Room 1 with Kris Wadsworth, Appleblim, Nicholas (Live), Hesseltime and eLDOKO bringing it home until 6am.

This year Gottwood Festival plays host to over 200 artists including Calibre, Gerd Janson, Margaret Dygas, Stephan Bodzin, Tale Of Us and Prosumer. Gottwood has promised that EP2 will follow this year’s festival and in an identical vein will feature up and coming artists from this year’s lineup.