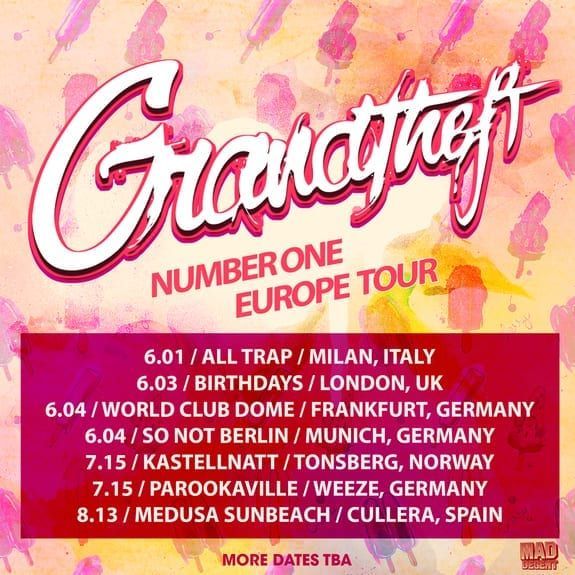 2016 has already been a landmark year for the Canadian bred DJ/Producer Grandtheft. From the recent release of his massive collaboration with Major Lazer ‘Number One’ to performing at some of the globe’s most prominent venues, Grandtheft now officially announces his 7-date ‘Number One’ European Tour with huge dates in Italy, UK, Germany, Norway and Spain!

Fans are in for quite the show across the continent, as the Canadian prepares to take his audience on a musical excursion, scanning everything from hip-hop and bass to the hard hitting electro which so many have come to love over the past couple years.

Having made tremendous waves in the scene with his stunning remixes, a handful of EP releases as well as his most recent collaboration on ‘Number One’ (which has amassed an astonishing 1.43 million plays on Soundcloud in just 2 months) there seems to be no stopping Grandtheft anytime soon. Completely revamping and reviving a classic dancehall record ‘Buddy Bye’ both Grandtheft and Major Lazer have injected a new life into the tune giving it a proper festival makeover primed to soar across airwaves all summer long.

On top of having performed at esteemed festivals and venues such as Ultra Music Festival, Mad Decent Block Parties, Webster Hall, Red Rocks Amphitheatre, EDC Vegas and many more, Grandtheft is now geared with an arsenal of new tracks in the ready and a handful of new dates across the world so be sure to keep an eye out on all things Grandtheft. For further information be sure to stay tuned to Grandtheft via his socials.