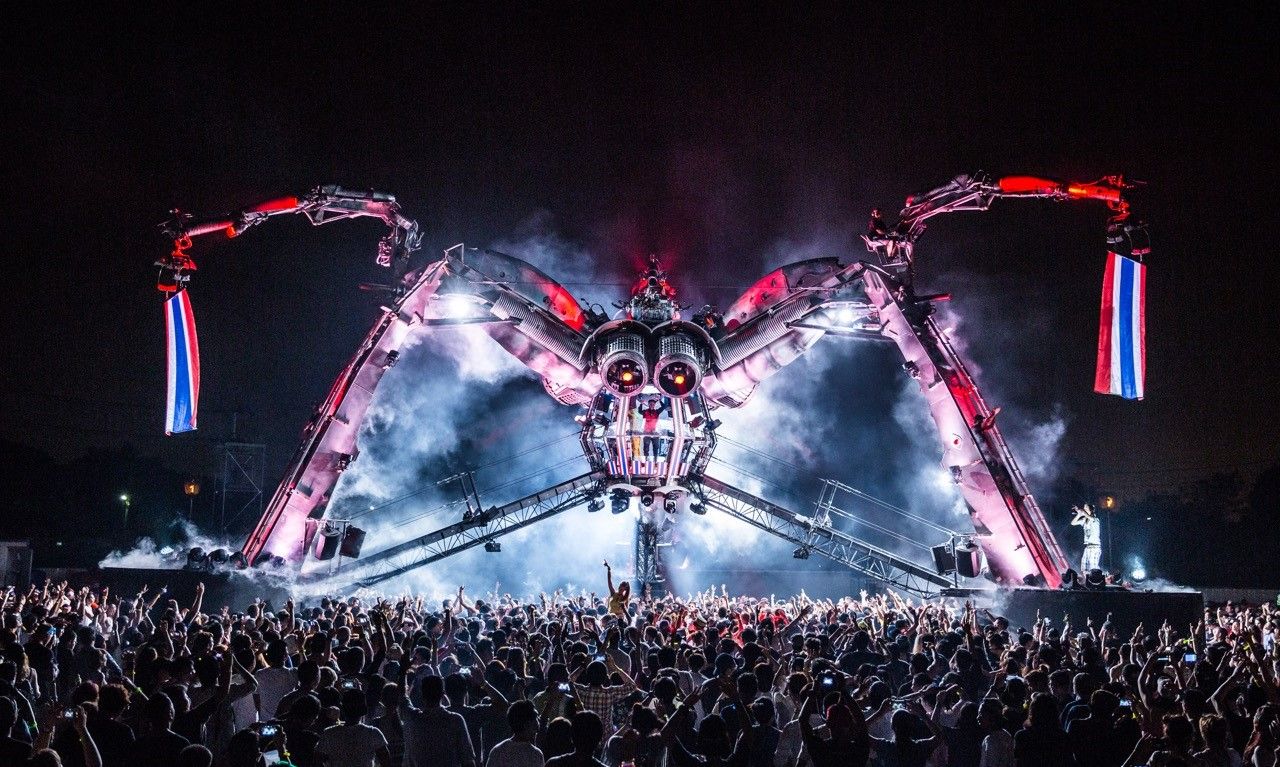 After the huge success of ‘The Bangkok Landing’ in November 2014, Arcadia returns to Thailand on the 23rd January 2016, taking over the heart of the city with an even more spectacular and exciting event. If you thought Gravity Thailand 2014 was extreme, prepare for your minds to be blown with a bigger DJ line up and a new central location making this an international, world class event not to be missed.

About Arcadia: Based in Bristol UK, Arcadia are a dedicated team of engineers, designers, performers and party starters with exceptional vision across the creative spectrum. They design and construct weird and wonderful machines and installations from recycled materials, transforming lifeless pieces of scrap metal into living mechanical sculptures and music stages. These extraordinary structures have taken centre stage at places such as the Glastonbury Festival (performing to 75,000 people in 2014), Boomtown Festival, and they were also called upon to display some of their vehicles at the closing ceremony of the 2012 Paralympics. In 2013, Arcadia won ‘Best Live Production’ at the prestigious TPI annual awards ceremony. Since their first international show with Gravity Thailand, Arcadia are now in high demand across the globe and have featured as far afield as the Ultra Music Festival in Miami and the Rhythm and Vines festival in New Zealand with their Afterburner stage production. Their most recent event saw 24,000 people gathered around the Spider in the historic centre of Bristol.

The Spider Stage: At the heart of the Arcadia Arena is the Spider stage, Arcadia’s largest and most radical structure. Straight out of the realms of science fiction, this colossal alien creature is the lynchpin of the Arcadia’s ecosystem and will be the main stage at the Gravity Thailand music event. The Spider is a 360 degree, spellbindingly interactive environment with a fully programmable DJ booth suspended above the sweet spot of the dance floor. This unique stage is also armed with LED screens, lasers, giant jets of CO2 and fire cannons that shoot flames 50ft high into the air sending shock waves through the crowd. Surrounding this awesome stage production will be a one of the best sound systems in the whole of SE Asia, especially designed and configured to create a 100m sound field with breathtaking results. Never attempted anywhere else in Asia this bespoke sound design submerges you in the music, elevating crowds to new heights of feeling and emotion.

DJ Talent: One of the successes of ‘The Bangkok Landing’ in 2014 was the DJ’s giving the audience an all round dynamic, euphoric and fun music experience. The next event will feature even an even bigger DJ line up, with some of the worlds most popular and exciting cutting edge performers. Sonically the DJ’s will take you on another journey through different styles of music, building the night with high impact sounds and creating an extreme party atmosphere like no other dance music event in Thailand.

The new location is now set for the next Gravity Thailand 2016 taking over the centre of Bangkok at Lumpini Square, Rama IV road. With easy access to the location from the underground MRT system it will make it even more accessible to attend and due to the popularity of the old night bazaar market, it’s a well known and recognised area for people to find.

Gravity Thailand is promoted by Four One One Entertainment and in association with Memotion Co.,Ltd. and Amazing Thailand