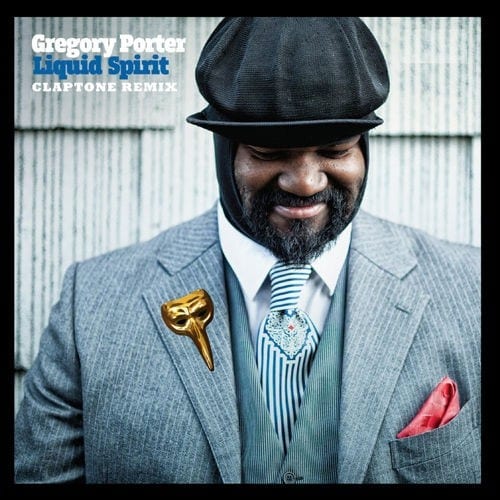 “Reigning Supreme in Ibiza at the moment”… “Danny Howard a massive fan of this as is Pete Tong, Annie Mac as well”
Nick Grimshaw

‘Man Of The Moment’* vocalist, songwriter and entertainer Gregory Porter’s dance scene success continued today as his Ibiza smash ‘Liquid Spirit’ was awarded the prestigious accolade of ‘Track Of The Day’ on BBC Radio 1, a first for Gregory who has till recently been predominantly championed by BBC Radio 2. Gregory’s recent Radio 1 support is the result of his unprecedented success within the dance scene after production enigma Claptone’s remix version of Gregory’s classic track ‘Liquid Spirit’, became the hit of the summer and the Most Shazamed track in Ibiza. This success lead BBC Radio 1 to the decision to add him to their Ibiza 20 event last weekend, where he preformed live on stage with Disclosure. Today BBC Radio 1 announced ‘Liquid Spirit’ as Track Of The Day via twitter, with DJs supporting the track including Nick Grimshaw who stated Gregory was: “Reigning Supreme in Ibiza at the moment”.

The remix is now well on course to becoming a summer smash. It has scored a number one on dance mecca Beatport, 918k plays on soundcloud and over 800k views on YouTube. The track is particularly connecting with Spotify users who have played the track over 5 million times and interest is increasing at a rapid rate with daily streams have increased by 500% in recent weeks.

This success lead to the decision to release a radio version of single: ‘Liquid Spirit – Claptone remix (Full Vocal Version) which has scored numerous plays across key UK radio stations and support form DJ’s including Nick Grimshaw, Cara Amfor, Pete Tong, Annie Mac, Danny Howard and Mista Jam. The new version of the track is out now and impacts at radio on 4 September.

Gregory who is primarily known in the UK for his jazz/soul inspired vocals recently remarked on his success within the dance music scene, telling Huffington Post: “I think even though I’m prominently known for singing jazz influenced songs, my influences are actually very broad and include a lot of soul, blues and gospel music which are vocally the foundations of many of the classic dance tracks we all know and love. So I suppose it’s not a huge leap for Disclosure to use my vocals on their tracks as they are influenced by the garage scene which used a lot of soul vocalists, but I never expected to be so welcomed and have such success in the dance scene, it’s been fantastic.”

Gregory’s success this year, has not been limited to the dance scene, as nearly two years after its release, his Grammy-winning album, ‘Liquid Spirit’, has become a hit record in the UK. The album landed a Top 10 in the UK Album Charts this March and has reached Gold sales, become the most streamed jazz album of all time and spent a whopping total of 72 weeks in the UK album charts this year so far! This year Gregory’s televised appearances and performances have included his hotly anticipated Glastonbury Festival debut, Sunday Night at The Palladium and VE Day 70. Gregory plays V Festival this summer, amongst others, and tours the UK next spring – opening at iconic London venue the Royal Albert Hall on 4 April 2016. For more information visit: http://www.gregoryporter.com