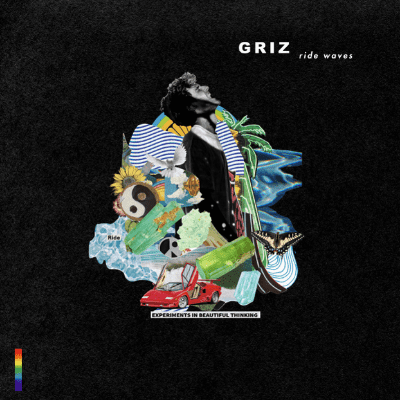 Every time GRiZ puts his mind to something, it’s a moment. It’s a fleshed-out idea, a fruit of commitment and passion, not an idea thrown at a wall and moved on from. Today, multi-instrumentalist, artist, producer, philanthropist and LGBTQ advocate, GRiZ, announces his sixth studio album, Ride Waves, along with a US headline tour, and releases a new single, “I’m Good.”

The 14-track LP sees Grant being immersed into the environments that have inspired his carefully curated sound. He tapped hip-hop favorites like Wiz Khalifa on “Find My Own Way,” and DRAM for “It Gets Better.” His sonic journey touched down in New York’s urban core to record with the Harlem Gospel Choir, stepped into Chicago’s South Side to collaborate with Chicago Children’s Choir, and spanned across many sessions in New Orleans. Snoop Dogg even sent in a verse from his studio in Long Beach.

There’s truly something for everybody in the record. Each song tips a hat to Grant’s personality, and many parts of this represent moments of reflection. GRiZ and Matisyahu were in the studio just days after February’s Parkland shooting, and a song about gun violence, “A New Day,” became of it. The album parallels Grant’s core as a human; it’s about love and a need for peace. It’s just another piece to the puzzle that represents GRiZ becoming the positive force that mainstream electronic and popular culture need.

Ride Waves will be paired with a US album tour, which kicks off in March and he will be touching down in Brooklyn, Philadelphia, St. Augustine, Minneapolis, New Orleans for Buku Music & Arts Project, Miami’s Ultra Music Festival, and more. As the year rolls on GRiZ will then take the album on an international journey taking in destinations such as Europe during the summer, as he seeks to bring his famed good-vibes and funk to dancefloors around the world!

GRiZ is a youth culture hero; he lives and breathes to better the communities around him. This year marked the five-year anniversary of his charitable event series 12 Days Of GRiZMAS – which to date has raised over $100,000 towards Detroit public school students. Adding to this, he released his own GRiZMAS coffee blend this year, which donates all of its proceeds to the same cause. This year in celebration of Giving Tuesday, he partneredwith Dan Savage’s foundation It Gets Better which aims to empower, uplift and inspire the nation’s youth members of the LGBTQ community.

In recent years, GRiZ has become a rare voice for the LGBTQ community in contemporary electronic music, a world which largely left its gay roots behind with the emergence of EDM. It was his very open and transparent coming out via a HuffPost op-ed in 2017 that started this dialogue, which led to him being named Michigan’s Face of Pride in 2018 by USA Today, and even recent praise from The Guardian for his philanthropic efforts for GRiZMAS.

Ride Waves will mark the beginning of the next chapter for GRiZ – one that sees him not only persevere as a solo artist, but also step up to the plate as he joins the ranks of the producers outside of the electronic world that inspire him. This is the most evolved version of GRiZ—and one that will continue to grow.