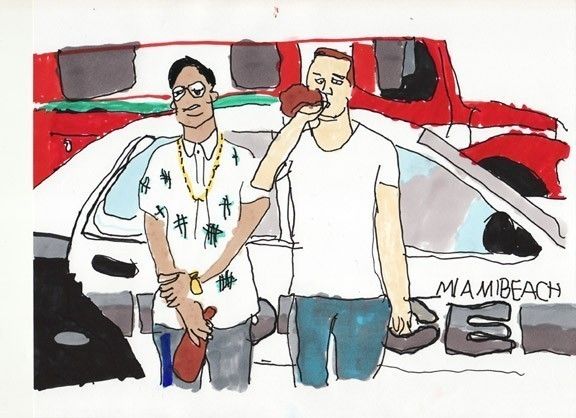 GTA are going truly global. On the back of a wildly successful stint supporting Rihanna throughout her European dates back at the beginning of the summer, GTA duo, Matt van Toth and Julio Mejia have been asked by the pop princess to join forces once more and rock the masses on the ‘Diamonds World Tour’.

Having destroyed the likes of the Stade de France and Twickenham Stadium in front of crowds exceeding 60,000 throughout Europe, GTA touch down on the Rihanna tour officially on the 13th September in Macau. With later dates in Australia, South Africa, Abu Dhabi, Israel and Barbados to come, the guys will have played a monster five continents and to over a million people by the time the tour draws to a close in mid-November this year.

To provide a teaser of what’s set to come for fans, GTA have released the next volume of their much-loved series of mixes, ‘Death to Genres’. Titled ‘Vol. 3 Made in America, the mix is influenced by some of the fellow artists that joined the Miami pair at Jay Z’s very own curated festival, Made in America, across Labor Day weekend. The artwork, designed by seven-year-old rap portraitist, Yung Lenox, fits in perfectly with the genre-less and playful vibe evident throughout the hour long mix.

GTA PRESENT ‘DEATH TO GENRES’ – VOL. 3 MADE IN AMERICA EXCLUSIVELY ON LIFE + TIMES

To further celebrate their appearance at Made in America, Matt and Julio also gave a crew from Life + Times an exclusive sneak-peek into their journey across Europe throughout the first leg of the Rihanna tour.

It really has been a whirlwind summer for GTA. Beyond supporting Rihanna on her European tour, the guys churned out exceptional remixes for Calvin Harris, Kaskade, Kylie Minogue and Kill the Noise and have also somehow found the time to play gigs at some of the most prestigious festivals worldwide like Wireless, Tomorrowland and the aforementioned Made in America. Add to this the recent news that they’ll be supporting Calvin Harris and Tiësto on the UK leg of their ‘Greater Than’ tour this December and you know why they’re destined for even bigger and better things in the months and years to come.