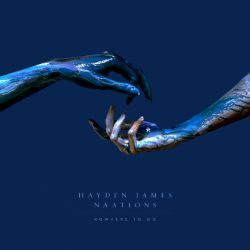 LA-based Australian duo NAATIONS team up with producer Hayden James for their brand-new single,‘Nowhere To Go’.

Speaking about their new single, NAATIONS say: “We met Hayden last year in LA and he played us a demo he’d written the night before and it sparked a memory of one of our demos we wrote two years before in Sydney. We worked them together in one day and we had a song, which was crazy!”

Responsible for the huge Ibiza 2017 anthem ‘Real Life’ with Gorgon City & Duke Dumont, NAATIONS continue to grow in stature over the past year, with the release of their debut EP Teardrop. The 6-track EP serves as an introduction to the duo’s ‘teardrop’ and ‘star’ concept, which represents ‘the light and the dark’ – which inspired their creative process. The EP includes their iLoveMakkonen collaboration ‘Long Time’, ‘Keep It Real’ and ‘History’ (both produced by frequent collaborator Baby Daddy of Scissor Sisters) and previous track ‘Air & Water’, which was produced by Alex Metric and gained strong support from Kiss Fresh and BBC Radio 1’s Mistajam.

Away from the studio, NAATIONS have performed at notable music venues both sides of the Atlantic, including New York’s Output as well as Brixton Academy and XOYO in London. The duo made their CRSSD Festival debut alongside Hayden, before heading back to Australia to support British songstress Anne-Marie on the AU leg of her tour. This year, NAATIONS will be supporting Hayden on the US and AU legs of his Between Us National Headline Tour as well as making an appearance atPinknic Festival in New York this summer – please find dates below.

‘Nowhere To Go’ demonstrates the superb vocals of Nat Dunn and the production talents of Hayden and Nicky Night Time. The single is sure to prove a massive summer hit for both Australian acts and gives listeners a taste of NAATIONS’ forthcoming Star EP.