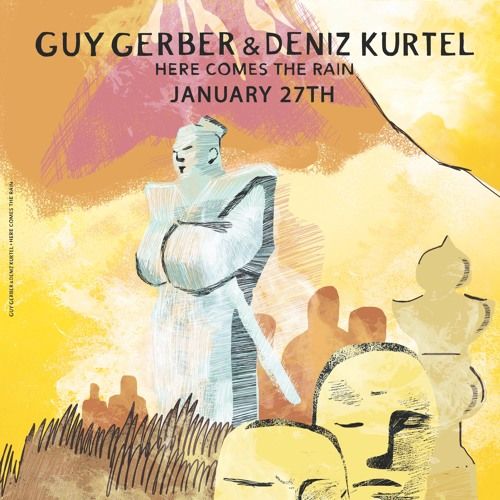 Ahead of its release on the 27th January, Guy Gerber has revealed the full stream of 'Here Comes The Rain'. The A side from the forthcoming two track EP of the same name, it will be out on Guy's own label RUMORS at the end of this week.

A collaboration with Deniz Kurtel, the EP combines the best of the pair’s shared ear for darkly atmospheric late night melodies. Title track ‘Here Comes The Rain’ is a highly-anticipated release, after having appeared in a number of mixes from Guy. Muted piano chords build up to a layers of echoing synths and subtle vocal samples for an evocative lead track.

Meanwhile, B-side ‘An Army Of Stalkers’, as its name suggests, is a slightly faster-paced affair with twinkling arpeggios and a subtle rolling bassline.

Guy Gerber and Deniz Kurtel have previously worked together, with Guy remixing her 2011 release ‘The L Word’. They’ve also performed alongside each other at a number of events, including Guy’s first Ibiza residency the Wisdom of the Glove.

The EP is Guy’s fifth release on the RUMORS label, which he launched back in 2014. It follows an incredible year for the DJ and producer; 2016 saw the RUMORS event series go from strength to strength, with the Ibiza residency gaining a glowing reputation and expanding internationally, taking in parties across Europe and the US. Following a critically acclaimed first solo EP on the label, ‘Secret Encounters’, Guy went on to sell out London’s iconic Koko Camden with the promise of an all night set. The release of ‘Here Comes The Rain’ sets the tone for further successes in 2017.