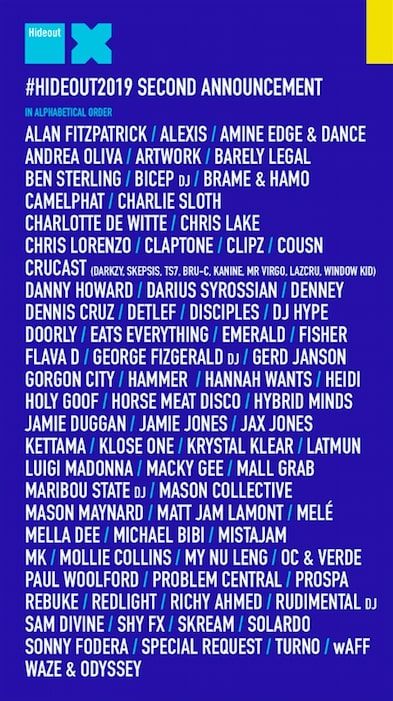 Today much loved Croatian festival Hideout announce a whole host of brand new names set to perform at the sun-soaked festival this summer. Welcoming back DJ’s and ravers alike year on year, #Hideout2019 is an essential in the summer calendar, with Darius Syrossian, Gorgon City, Jax Jones, Gerd Jansonand Michael Bibi freshly added to the bill.

Set against the scenic Adriatic shores, soundtracked by the best in house, techno, disco, grime, DnB, garage and beyond, Hideout returns with yet another all star announcement joining an already hefty bill of headliners including BICEP, Jamie Jones, MK, Rudimental, Skream and many more.

Returning to Croatia for yet another year, after recently released seminal album Escape, are two of North London’s finest producers Gorgon City. Also joining them will be long term friend of Hideout and Space resident Darius Syrossian, who has been leading the way in tech house for the past decade and chart topper Jax Jones, having worked alongside Stefflon Don, RAYE to name a few.

Elsewhere, iconic Running Back label owner Gerd Janson will also head to Hideout seamlessly blending the finest house and disco cuts alongside South London’s answer to tech house, Michael Bibi whilst Two Hot Creations signings Dennis Cruz and Doorly will both head back to the beach for 2019.

Meanwhile, alongside headliners Bicep, also flying the flag will be Galway native Kettama having made big waves in regional and national scenes for the past couple of years. He’ll be joined by tech house artist Rebuke and deep house duo Brame and Hamo who’ll make their Hideout debut.

Up next is Berlin based Alexis, who’ll take ravers on a journey into the early hours. Barely Legal steps up on more of a darker tip, providing grime and bass heavy anthems. Two Manchester club mainstays Mason Maynard, and promoters-come-producers, Mvson Collective will head to Croatia.

MOOD Records boss lady Nicole Mouldaber will also grace the decks. She’ll be joined by Cinthie, the Berlin native who’s been a staple figure on the scene since the 90’s.

With earlybird and first release tickets already sold out, act fast to secure your place for what will be a Hideout to remember. Packages will also be on sale, with accommodation and ticket bundles from just £275.

Flight packages are also available to make the trip even easier with options flying from London, Manchester, Birmingham, Bristol and Dublin to Zadar and Split and at very competitive prices. More info HERE.

Make sure you don’t miss out! Now is the time to lock in your place at Europe’s leading electronic music favourite before tickets and the best packages sell out.