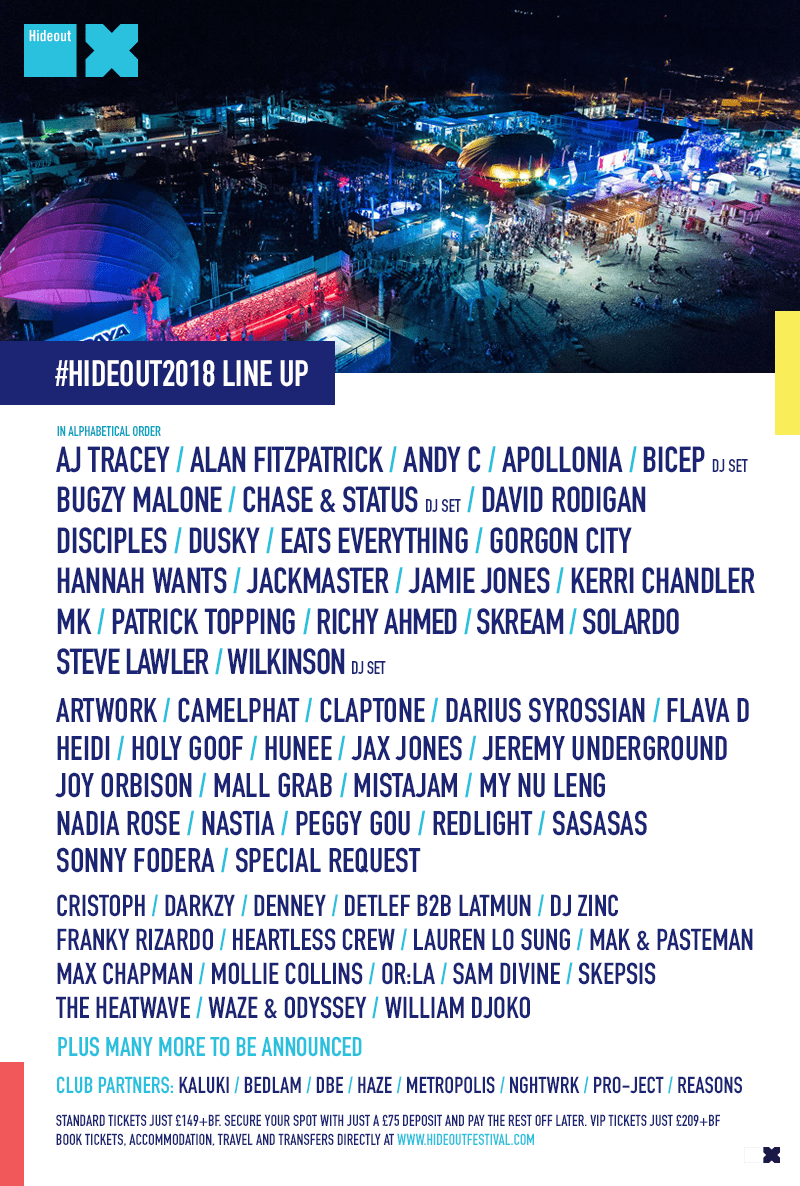 After announcing an unbeatable first wave of names, Hideout 2018 continues to shape up to be an unmissable highlight of the European festival season – with a huge second influx of names heading to the Island of Pag next year.

Another name added today is Jamie Jones, a pivotal figure in the underground scene who’s been instrumental in helping usher in the recent house music revival. The Welsh-born, LA-based DJ/producer and Hot Creations label co-founder is infamous for shattering boundaries in house and techno, and has been an essential spinner in venues across the globe, refining his performances to form one of the most exciting shows dance music has to offer. Heading to Hideout in 2018, his performance will be a true spectacle nestled underneath Croatian skies.

A fellow member of the Hot Creations crew, Richy Ahmed is the second name to be added to the irresistible lineup. As a huge name from the British house music scene, Richy has been a powerhouse in the resurgence of the genre, and has formed an undeniable presence in the party capital of the world, holding down residencies and all night sets at Ibiza’s Paradise DC-10 and Amnesia. Richy’s reputation as one of the best DJs and producers around is firmly established, and his beach side set next June will no doubt highlight this.

Club royalty Steve Lawler will also be bringing it back to the beach for Hideout 2018. A giant in his field and now 20 years deep into the game, Steve started out organising the infamous raves underneath the M42 motorway, and has garnered the nickname “The King of Space” thanks to his 9-year reign in the legendary Balearic Ibiza venue. His set at Hideout 2018 is bound to be an awe-inspiring display of an artist who really shows no signs of stopping.

Responsible for some of Pag’s biggest pool parties last year, queen of the Jackathon Heidi will also be returning to the festival, along with fellow BBC VIPMistaJam, a figure who defies categorisation and will no doubt unleash his signature blend of grime, dancehall, dubstep and bassline.

Bringing some of the biggest names in electronic music together across five packed festival days, Hideout has consistently proven itself unrivalled across the electronic music landscape.  With over 20,000 like-minded people joining together under the sun in open air venues till 6am, and a wealth of activities all included within one ticket – Hideout is the only place to be this summer.

Richy Ahmed said:
"Every year the party gets better and better, always a staple for the summer season"

Mak & Pasteman said:
"Having been part of Hideout since its inception, it has been great to see it grow and develop into what it is today! The location, the stages, the music, this festival is something we always look forward to every year and each time we return it exceeds expectations… Get us back to Zrce!!"

Denney said:
“I can't wait to return to Hideout Festival, definitely one of the most fun weeks of the year set in beautiful surroundings with some amazing parties on land and sea!”

Max Chapman said:
“Hideout has definitely become one of the biggest events of the summer, so to be included on the line up for the first time in 2018 is a big way to end the year! I’ve heard some amazing stories about it and I can’t wait to dig out my shorts and see what all the fuss is about!”

Waze & Odyssey said:
“Always a highlight in the diary, Hideout is one of the maddest, wildest weeks we can't wait to be back!”