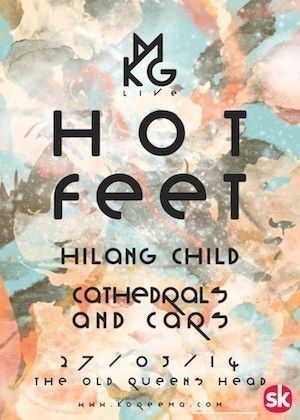 Hot Feet are a folk rock band from Stroud, Gloucestershire whos music lives and breathes in the countryside. ‘Wood House’ was written in a small cabin on the east coast of Sweden and recorded in a remote studio in the Scottish Highlands, only accessible by boat. The five songs are set, however, in the Cotswolds where Marianne tends to goats and sheep when she’s not playing music, and Lachlan builds dry stonewalls.

The band draw together a range of musical influences including delta blues, sixties folk and world rhythms. Clamorous in places, delicate in others; sometimes offering raucous, earthy uproar and a wistful, yearning narrative within the same song. The EP ranges from stomping gallops to tender ballads, and has been lovingly and impressively produced by Pete Roe, long-time side-man of Laura Marling and a gifted songwriter in his own right. https://soundcloud.com/hotfeetmusic

Hilang Child is the solo songwriting project of Ed Riman. As a drummer, Riman has performed with numerous bands and as a touring session musician, but is now moving out from behind the kit to take centre stage for the first time. His homemade brand of dream-folk, complemented by hand-printed artwork by his own late grandfather, has been compared to artists such as Fleet Foxes, Stornoway & Sigur Ros. stunner. https://soundcloud.com/hilang-child
“Incredibly moving… give a listen, get carried away” – The Needle Drop
“Delightfully understated pop… it’s really quite lovely” – The Tipping Point
“Riman slowly unleashes ascending builds of harmony, billowing and growing into shifting and increasingly sublime heights. It’s an astonishingly accomplished collection of songs for a first release” – Everybody Taste

Cathedrals and Cars are a Suffolk-based five piece alternative band. They have been described as ‘a revelation’ and ‘mesmerising’ (B-Side Magazine). The band has come a long way since their inception in 2011 when they were an acoustic 3 piece band who released an ep, Sky Lanterns, on Cemetery Bench Records in November 2011 described as ‘beautiful yet melancholic’ (Generator.org.uk). It gained attention from BBC Suffolk Introducing who offered them a live session in January 2012. https://soundcloud.com/cathedralsandcars