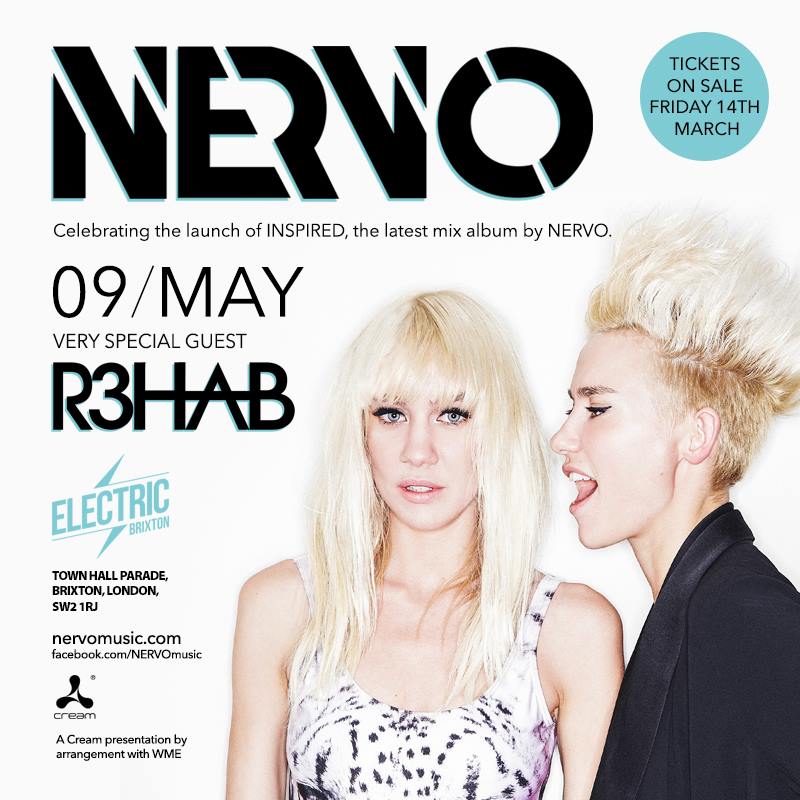 We’re pleased to announce that NERVO are back in the capital on Friday 9th May to celebrate their ‘Inspired’ Album launch at Electric Brixton, joined by genre defining Dutch DJ/Producer R3hab.

It’s not often you come across an artist who has it all, but NERVO do. Over the last few years these multi-talented sisters from Oz have been making some serious noise in the dance world, having jumped 30 places to #16 in the DJ Mag Top 100 poll they are fast emerging as one of the most sought after DJ duos in the world, and their talent doesn’t stop behind the decks, they are also hit songwriters, producers and artists in their own right, having penned for the likes of Ke$ha and Kylie to name a few, with their most notable big break coming from their collaboration with David Guetta on the world wide smash hit ‘When Love Takes Over’ featuring Kelly Rowland, which charted at #1 in 11 countries across the globe and won a Grammy.

With 3 major big records on Beatport in 2013 they have been making serious waves on both shores of the Atlantic with their infectious blend of chunky, sexed up electro-house which is exactly what we can expect from their latest mix album ‘Inspired’. The girls will also drop their debut artist album later this year, which is then set to propel them even higher into the realms of dance music royalty. Join them and R3HAB to celebrate on Friday 9th May.