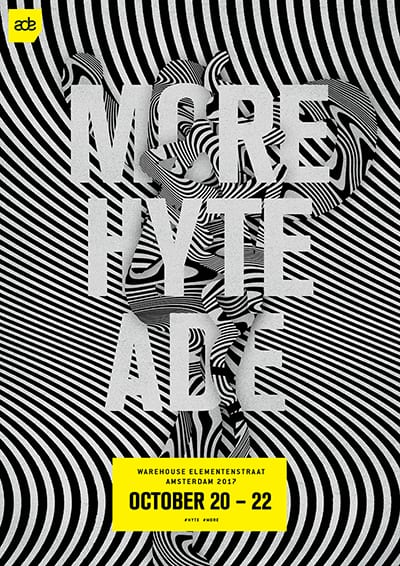 Global party brand HYTE returns to Amsterdam for the fourth consecutive year of Amsterdam Dance Event (ADE) warehouse parties. Fresh off the back of a 6000-capacity open-air special in New York and a third season at Ibiza’s Amnesia, HYTE will once again be taking over Amsterdam’s Warehouse Elementenstraat with one of it’s most impressive lineups to date. International DJ headliners, upcoming talent and leading music labels and brands are combined with cutting edge production that will transform the no-frills space of the legendary warehouse into a techno temple for the hordes electronic lovers gathered in Amsterdam. The billing includes Loco Dice, Ricardo Villalobos, Chris Liebing, Seth Troxler, Pan-Pot, Marcel Dettmann, Dekmantel Soundsystem and many, many more.

The four HYTE events during Amsterdam Dance Event (ADE) make use of the venue's newly granted 24-hour license, with extended opening hours ensuring an almost non-stop revellers sanctuary. HYTE does not disappoint with its ever-growing army of heavyweight headliners; Ricardo Villalobos and Seth Troxler head up the warehouse on Friday’s opening night, joined by Amsterdam stalwart Steve Rachmad, Sonja Moonear and Dutch wunderkind, Ferro. In the Club room Enzo Siragusa returns with his London-based FUSE crew – a partnership that has been further cemented this summer as FUSE join HYTE in Ibiza for four dates throughout the season. Enzo is joined by regulars Archie Hamilton b2b Rossko, Seb Zito and Rich NxT.

With barely a second to catch a breath, the party continues with the very first daytime event of HYTE during ADE at 08:00 in the morning. The Saturday daytime event sees Berghain resident Marcel Dettmann joined by Detroit legend Robert Hood, Dekmantel Soundsystem, Ghostly's Ryan Elliott, the man behind the new Kern mix for Tresor DJ Stingray and French star DJ Deep.

Starting from 22:00 on Saturday it goes on with the seemingly unstoppable Pan-Pot, Rekids head honcho Radio Slave, Monoloc and Benny Rodrigues’ techno-focussed alias, ROD, in the warehouse, with Chris Liebing lined up for a monster 6hr set – a chance for the techno veteran to exhibit the darkest depths of the powerful and uncompromising sound he is famed for. The Saturday night event is an extended one, it does not end before Sunday, 12:00 noon, and also features Cuartero, Wouter S and Man With No Shadow in the Club room.

Sunday night’s closing belongs to Desolat boss and HYTE favourite Loco Dice, as he turns to the warehouse into a no-holds-barred final blowout of the ADE week, with his trademark tech-house swagger and punchy, bass-heavy beats. He is joined by Guti and William Djoko in the warehouse. Amsterdam’s own Slapfunk label take over the Club room with Samuel Deep back-to-back Julian Alexander, LockLead, Anil Aras and POV live.

And for those who can’t get enough of HYTE: The party crew organised an afterparty on Monday morning at a secret location. More details on this last HYTE event during ADE week to be announced…