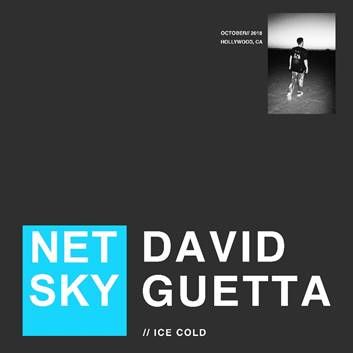 “Ice Cold” opens the duality of upcoming Palmtrees & Powerlines, the two-part project that explores both NETSKY’s magnetic brand of pop music (on Palmtrees) and his genre-bending innovation as a creator of club tracks (on Powerlines).  “Ice Cold”, with its dancefloor vibes, finds its home in Powerlines, where previously released “Téquila Limonada” feat. A.CHAL, aligns withPalmtrees.  Each song from Palmtrees & Powerlines will find a place within one of these two worlds NETSKY has built.

About their “Ice Cold” collaboration, Guetta excitedly said, “Working with NETSKY on this track was amazing. He’s such a great producer, and I’m really happy with the end result.”

“’Ice Cold’ was such a fun song to make.” NETSKY adds about the new song, “I remember both Stargate and David Guetta making me crank up this demo in a LA studio and all of us vibing to it together. Working with David was amazing, it was inspiring seeing his work routine and energy in studio and I’m so excited to be releasing this single today.”

Stay tuned for more to come from Palmtrees & Powerlines.