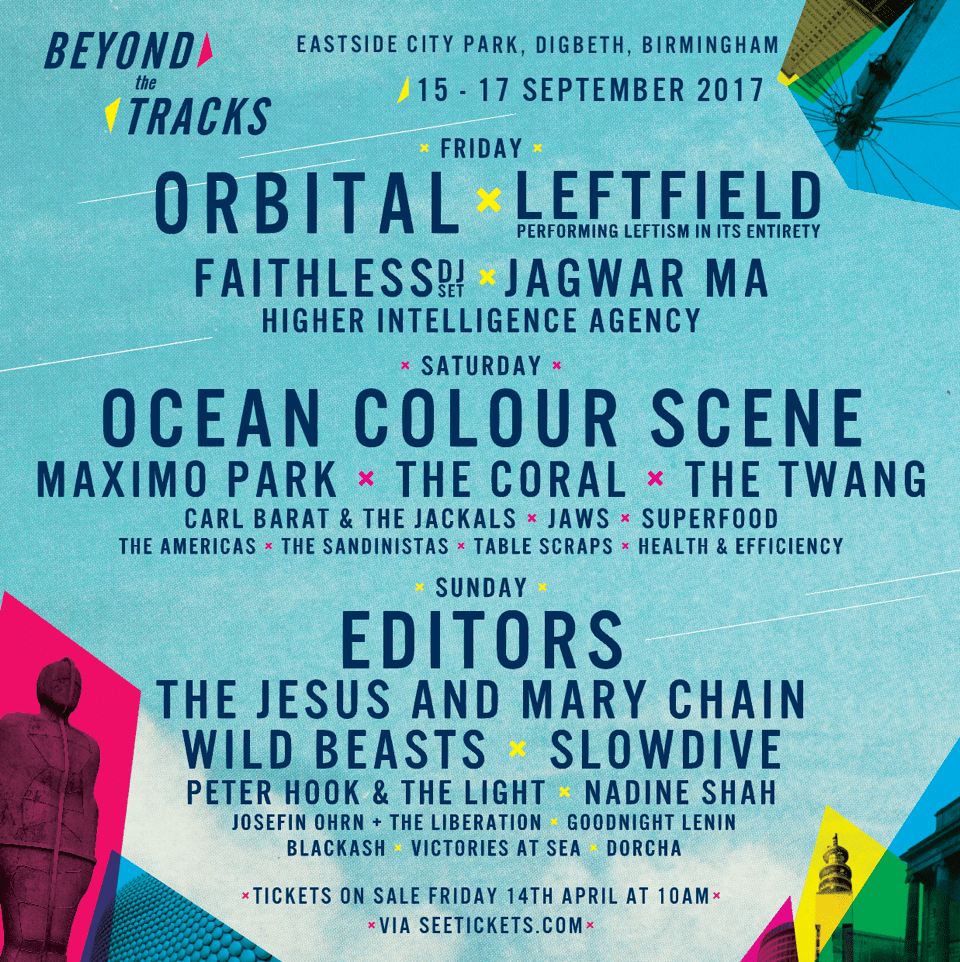 Beyond The Tracks is a brand new, three day, green field festival taking place at Birmingham’s Eastside City Park in September.  Featuring some of the most revered names in UK music and the brightest new stars, the festival is a welcome addition to the musical offering of the UK’s second city.

Friday night sees electronic music pioneers Orbital headline with the Hartnoll brothers reunited after a five-year hiatus. Orbital were one of the key acts responsible for taking electronic music into the mainstream and out of the clubs and into live venues and festivals.  Their seminal live performances are the stuff of legend and their set is sure to evoke the halcyon days of acid house.

Seminal electronic act Leftfield released one of the greatest dance records of all time in Leftism and they will be performing the album in its entirety at Beyond The Tracks.  Leftfields progressive mix of house, dub and reggae defined them out as true electronic music pioneers and their performance alongside Orbital is sure to be one of the most memorable moments of the summer festival calendar.  Faithless released some of most anthemic singles in dance music history with ‘Insomnia’, ‘God Is A DJ’ and ‘We Come 1’.  They will play a very special DJ set.

Australian neo psychedelic ravers Jagwar Ma will bring the big hooks and ravey breakdowns of their two albums ‘Howlin; and ‘Every Now And Then’ with a rich journey into unfiltered and infectious modern hits.

On Saturday local heroes Ocean Colour Scene will take to the stage for a euphoric hometown headline performance.  With a huge catalogue of hits including ‘The Riverboat Song’, ‘The Day We Caught The Train’, ‘Hundred Mile High City’ and many more, their hit laden set will have the city reverberating to their guitar anthems.  Proud Brummies, their hometown shows are joyous, exuberant occasions and not to be missed.

Liverpool’s The Coral will perform a career spanning, genre juggling set encompassing Mersey pop, psychedelic rock and rich ballads all delivered with a classy pop sensibility.
Local boys The Twang are a band the city holds very close to its heart and their rebel rousing swagger and indie rock anthems ‘Ice Cream Sundae’ and ‘Push The Ghosts and the heart-bursting tenderness/euphoria-straddler ‘Either Way’ will be memorable Beyond The Tracks moments.

Carl Barat and The Jackals will perform tracks from their album ‘Let It Reign’ as well as some Libertines classics in a set that will crackle with delinquent fervour and lyrical punch from a generational titan.

Some of the most exciting emerging acts from Birmingham will also take to the stage including indie-pop band Jaws, Dirty Hit signees Superfood whose raucous live sets are gaining them national acclaim, 70’s rock evangelists The Americas and art-rock experimentalists Health & Efficiency – with Welsh pop-punk outfit The Sandinistas also leading the new music brigade.

Sunday night will be closed by huge multi-million selling headliners. Editors, Stafford University alumni and Birmingham residents, the band have always had a love affair with the second city and are undoubtedly one of the best acts the region has ever produced.  Over five albums their alt- rock, synth heavy, rumbling basslines and electronic tinged anthems are big and bold as evidenced by hits such as ‘Munich’, ‘Blood’ and ‘Smokers Outside The Hospital Doors’.

Few bands have had such a huge effect on musical culture, as The Jesus and Mary Chain.  Their attitude alone, dressed in black, angry with the world, playing short sets drenched in feedback, set the bench-mark in the post Sex Pistols music scene of London and their seminal debut album Psychocandy would go on to change the course of popular music. Still a potent live force, Beyond The Tracks is proud to host them at the inaugural festival.

Five albums in Wild Beasts still sound arresting and fresh and their live sets are as gripping as ever.  Expect electro-indie with a rock swagger from a talented, ambitious group of musicians clearly keen to explore new and bold territory.

Ticket Information
Beyond The Tracks tickets are on sale from Friday 14th April, and are available from;
http://beyondthetracks.seetickets.com
Ticket prices begin from £45.00.
Tier 1 – £45 // Tier 2 – £49.50 // Student Ticket – £40 –
Box Office Collection Only – One ticket per NUS holder. Must have card to collect.