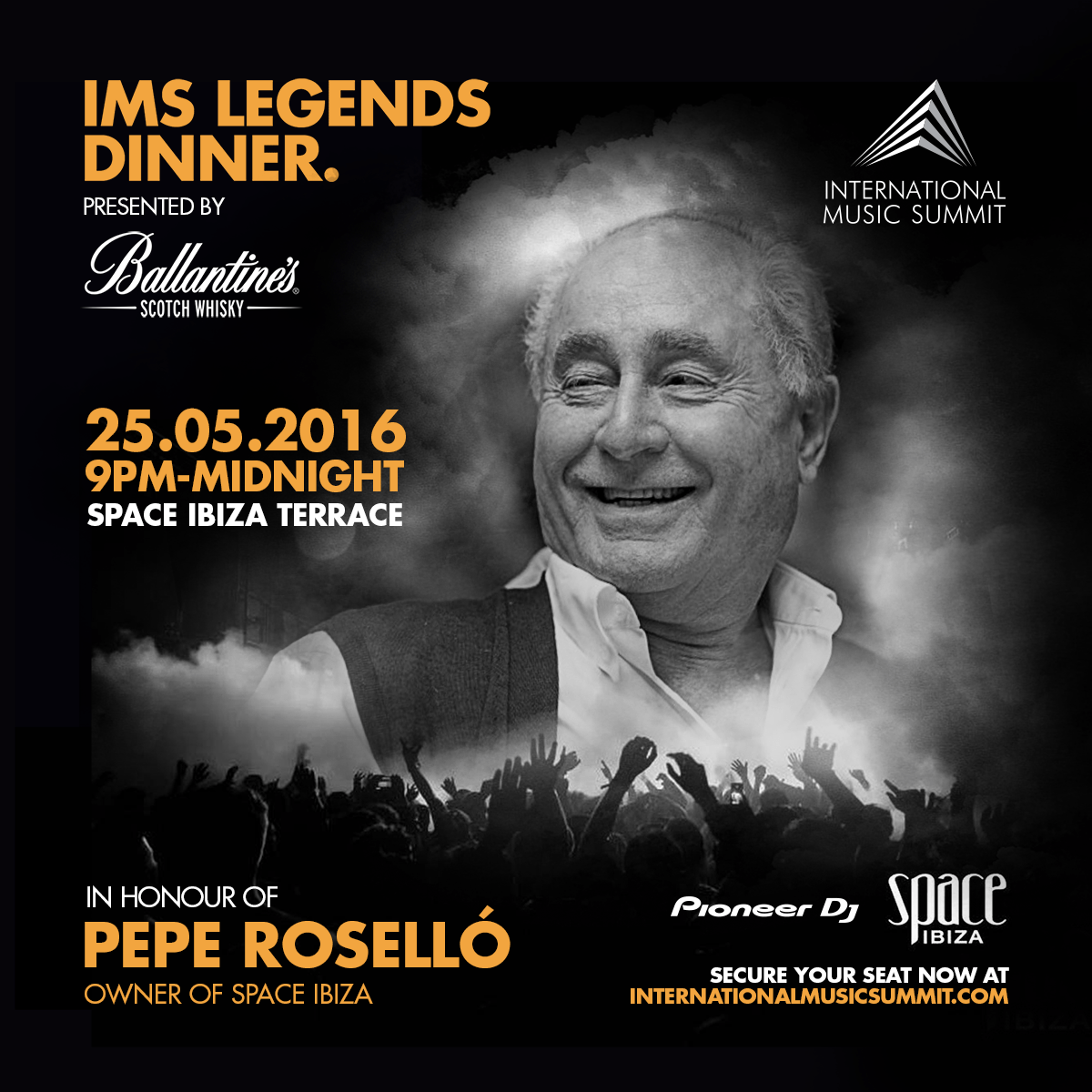 International Music Summit can now reveal that Space Ibiza owner, Pepe Roselló has been named as 2016’s recipient of their coveted ‘Legends’ award. Given to a pioneer in the electronic world each year, previous winners include Nile Rodgers, Fatboy Slim, Pete Tong and Carl Cox, with the celebratory banquet set to take place on Space’s legendary terrace on Wednesday 25th May – a fitting location for dinner guests to see the club for one last time before it draws its final curtain.

Presented by Ballantine’s Scotch whiskey, the IMS Legends Dinner will celebrate Pepe and his 27-year legacy of Space. Widely regarded as one of the most recognized and respected businessmen of the Balearic Islands, Pepe Roselló was born in Ibiza in 1937 and has spent a lifetime dedicating himself to the world of musical entertainment and is a true embodiment of what the award honours. Previously the Second Major of San Antonio, Pepe established his club owning career with the San Antonio club, Playboy, in 1963 before taking over the reigns at Space in 1989 – and has gone on to build the venue into a musical Mecca for tens of thousands partygoers today.

Having been behind the club’s trajectory for almost three decades, Pepe’s initial bookings of techno and trance legends Sven Väth and Marc Spoon have been intrinsic to the club’s success. From there on in, parties were only getting bigger and better, with Sasha, Richie Hawtin, Steve Lawler, Dave Seaman, John Digweed and Carl Cox to name a few all hosting parties. Its cornerstone residency ‘Sundays at Space’ proved to be one of the world's most celebrated and loved club nights, and showcased the world’s most exciting electronic music talent through marathon day to night parties each week. Built upon an ethic of love and togetherness, Sundays at Space undoubtedly played a pivotal role in shaping the patterns of behaviour of the entire island and only re-affirms Space’s position as a taste-making institution. For the past two decades, the club’s opening and closing parties have signaled the beginning and the end of the Ibiza season.

During his 27-year reign at Space, Pepe has always brought innovative ideas to the table and has always strived for Space to be the number one destination for dance music lovers. The emergence of the club has helped place Ibiza as the ultimate clubbing destination, with the finest DJ’ing talent consistently gracing the decks – and have all equally expressed their love for the club. Undoubtedly, Pepe Roselló is one of the key parts of the engine that drives the island.

IMS co-founder Ben Turner states: “The closing of Space as envisioned and run by Pepe Rosello is the end of an era for Ibiza and a fascinating changing of the guard of the old-school Spanish-owned discotheques of Ibiza. It will be a different island without Space. Pepe’s passion and love for music has been there for all to see with his regular appearances in the DJ booth at key moments and he became that rare thing: a night-club owner that the clubbers applauded as much as the DJ. Pepe has done so much for Ibiza creatively and politically and he truly deserves this accolade from the electronic music industry and from IMS.”

Tickets for the IMS Legends Dinner are on sale now: www.internationalmusicsummit.com/attend/