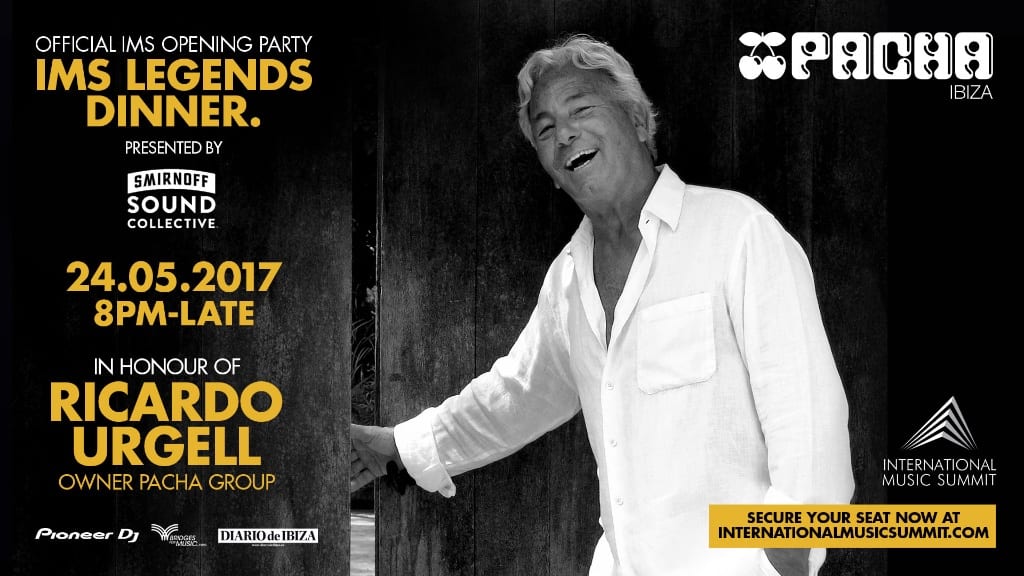 The IMS Legends Dinner presented by Smirnoff Sound Collective will be celebrated on Wednesday May 24 2017 at Pacha Ibiza. Followed by the official IMS Opening Party @ Pacha Ibiza featuring Masters at Work, The Black Madonna and Agoria.

International Music Summit (IMS) recognise and pay homage to Ricardo Urgell founder of Pacha Ibiza and the worldwide Pacha Group with the prestigious IMS LEGENDS AWARD. This special award is bestowed upon true pioneers in the electronic music world for their outstanding contribution to the industry.  2017 marks the 50th anniversary of the Pacha Group and the award fittingly commemorates this. Coinciding with the 10th anniversary of IMS Ibiza and a special moment for the summit, the award recognises the influence and inspiration that Pacha has generated in the international clubbing and music industry. Previous winners of this accolade have included Nile Rodgers, Fatboy Slim, Pete Tong, Sven Vath and Carl Cox.

IMs co-founder Ben Turner says: “Ibiza is defined by Pacha. It is the venue that seduced myself and all of my IMS partners in some way, with most of us collaborating with the brand over the last 20 years. Ricardo Urgell is a true maverick, a true conductor of the night and with it one of the most poetic and imaginative creatives in nightlife – period. The global electronic music scene would be very different today without his influence and the joy his truly global brand has given to millions of people around the world, let alone the careers of many DJ’s who made their name under the roof of the cherry logos. We are proud to honour him in this way. His influence extends way beyond nightlife, but to global culture as a whole.”

Late in 1967 a small discotheque in Sitges located on the Barcelona coast opened its doors, it was to be called Pacha. Founded by Ricardo and brother Piti Urgell they set out to create a place where people could have fun, express themselves and throw the best parties ever. Six years later in 1973 the burgeoning club concept arrived in Ibiza and arguably the standard was set and one of the best clubs in the world was created.

Now 50 years on the famous Pacha cherries are a world-famous symbol of musical integrity, world class DJs, glamour and lifestyle. In this time, through hard work the brand has seen huge expansion to some of the most exciting places in the world, now situated in many countries worldwide including China, Australia, Macau, Germany, and in the most important Spanish regions and cities Ibiza, Gran Canaria, Mallorca, Barcelona and, La Pineda. It is also a hotel brand and a global merchandise phenomenon.

Ricardo Urgell says "With much hard work over five decades I never lost sight of my vision, I have had the pleasure of creating some very special places around the world where several generations of people have been able to enjoy the rhythm of the dancefloor. I cannot be prouder to see how the Pacha Group is recognized worldwide, and my great desire for the 50th anniversary of the brand is that the cherries survive and continue to bring people pleasure, as they have done so far throughout history."

The award will be the pinnacle of the IMS Legends Dinner presented by Smirnoff Sound Collective and Diario de Ibiza, held in celebration of Ricardo, and he will be interviewed by Juan Suarez from the Diario de Ibiza on the stage. Naturally the dinner will take place at Pacha Ibiza on the 24th May 2017. This night also marks the opening of the tenth anniversary of IMS Ibiza with special guests Masters at Work, The Black Madonna and Agoria performing after the dinner at the official IMS Opening Party.