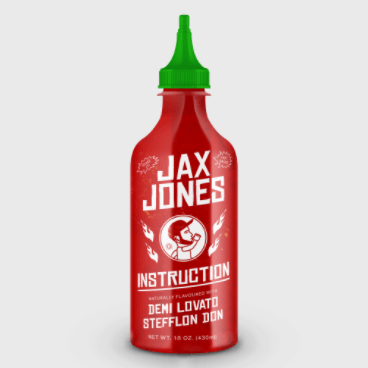 South London multi-instrumentalist, songwriter and producer Jax Jones is riding high following the worldwide success of smash single 'You Don't Know Me' featuring BBC Sound of 2017 nominee and future star Raye, and looks set to continue his winning streak with his brand new single 'Instruction'. 'Nothing says summer to me more than Notting Hill Carnival,' Jax says of his new single. 'That was the mental image I used throughout the making of this song. I took the idea to my good friend MNEK and the song came together really quickly. The DJ is the controller of the dance floor and lyrically, I wanted to reflect that; hence why we're giving instructions!

Enlisting global pop star Demi Lovato and the UK's fiercest MC Stefflon Don 'Instruction' is an empowering percussion led call to the dancefloor. 'B*tch I don't need introduction' Lovato snaps, whilst Steff delivers fiery 'bad gal' bars that leave you in no double, she really is the Don. 'I wanted to continue where I left off with 'You Don't Know Me', Jax explains. 'We knew we needed someone with a certain level of swag and confidence to pull off a song like this so we sent it to Demi Lovato to see if she was interested. I thought it was a long shot but she loved the record and delivered us all the right feels in the vocal. Stefflon Don is one of the most exciting new rappers to come out of the UK today, so getting her on a song with a pop superstar like Demi is a defining moment for me as a fan of music. I love clashing genres together. It's one of those collaborations which is as exciting on paper as it sounds on record. I can't wait to play this song at my festival shows this summer!”

‘You Don’t Know Me’, a sassy rebuff to fake friends, has had over 275 million combined global streams and gone 3 x Platinum in The Netherlands, 2 x Platinum in Australia, Ireland, Sweden, Platinum in Norway, UK, Italy and
Gold in Belgium, France, Germany,with over 6.3m total Shazams hitting the #1 spot on Shazam globally, making it Jax’s biggest hit to date.

Jax’s music is rooted inthe hip hop, grime and house music he was surrounded by in his teenage years. These influences come through both in the studio and in his wild live sets – most recently in his sold out ‘House Work’ UK tour –where he helms all the instruments himself, layering them upon beats and bass for a fresh, modern take on an old school sound.

Prior to ‘You Don’t Know Me’ his biggest success to date had been as the writer and co-producer on Duke Dumont’s huge international 2014 hit ‘I Got U’, which resulted in his first UK No.1 in addition to nominations on both sides of the Atlantic, at the BRIT and Grammy Awards. As well as producing Duke’s following two singles,he has remixed the likes of Charli XCX, Lil Yachty, Missy Elliot and Pharrell.

Jax has a very busy summer ahead of him with appearances at Capital’s Summertime Ball, Tomorrowland,Reading & Leeds, Boardmasters, Ushuaia and Pacha to name just a few – head to http://www.jaxjones.co.uk for full details.