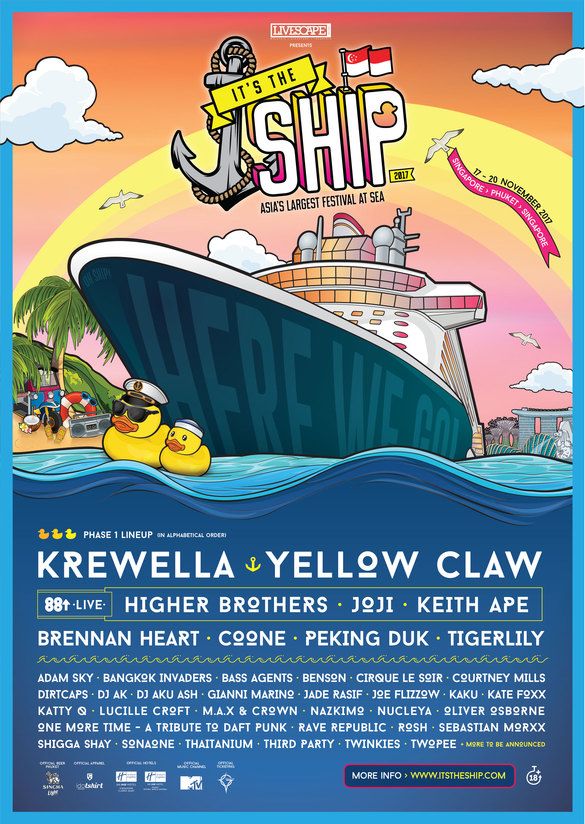 After months of speculation and excitement, Asia's Largest Festival at Sea, It's The Ship, today (17thAugust) reveal their first phase line up. Due to set sail from Singapore to Phuket on November 17, those lucky enough to get hold of tickets will be treated to the hottest rising and mainstay international talent across the dance and hip-hop spectrum.

The first two headliners to be announced by organisers Livescape Group are Dutch trap heavyweights Yellow Claw and one of the most explosive electronic groups of the past decade, Krewella.

Yellow Claw, whose hefty cuts have been championed by the likes Mad Decent, Spinnin', Ultra Records and Fools Gold, have quickly become some of the most hyped artists on the circuit today. Incorporating elements of trap, hip-hop, dubstep, hardstyle and moombathon, and having collaborated with the likes of Pusha T, Tinie Tempah and Flux Pavillion, this enigmatic duo are an absolute ‘must-see’ for the 4000 music fans on-board luxury cruise liner, Genting Dream.

They join one of the most talked about musical acts in recent history. Sisters Jahan and Yasmine Yousaf, better known to millions around the planet as Krewella, redefined an entire generation of music, defiantly blending genres of rock, electronic and bass. With a reputation for setting the dance floor on fire and bringing a huge arsenal of brand new music as they prepare to drop ‘Get Wet’ follow up album ‘New World’, Krewella look set to provide one of the most electrifying performances for shipmates on It’s The Ship 2017

Yellow Claw and Krewella are bolstered by an eclectic array of support that includes Aussie favouritesPeking Duk and Tigerlily, Dutch Hardstyle heavyweight Brennan Heart, London-based house outfit and Martin Garrix collaborator Third Party, One More Time – A Tribute To Daft Punk, providing festival goers with the first and only realistic tribute to the seminal French super group, and from the 88risingcollective, ‘It Ma G’ superstar Keith Ape, tough-talking Chinese rap group Higher Brothers and rising lo-fi star joji. With a host of regional talent playing alongside these superstars, including Singapore DJsRave Republic and Oliver Osbourne, Malaysian duo Twinkies, Thai-American hip-hop triple hitters Thaitanium and Indian monolith Nucleya, It’s The Ship 2017 promises to be the biggest edition yet of the floating festival goliath.

Coupled with this Phase One announcement comes It's The Ship's 'Blast From The Past' video series, that showcases different elements of this unique experience at sea. With four themed visual snapshots already uploaded, including 'Fun In The Sun' (Daytime Parties), 'Costumes', ‘Activities’ and ‘Team No Sleep’ (Night Parties), It's The Ship today release the last in the series, 'Artists'. Zipping between various DJs including Dada Life and Raiden, the video gives a flavour of how the 2017 artists will be whipping the crowd into a frenzy on deck; check it out below.

Last but not least, It's The Ship are offering the first 350 ticket buyers in August an exclusive party bag filled with on-board essentials. Never short of surprises, It's The Ship have also announced that one bag will contain a 'golden ticket', granting the lucky receiver free access to next year's festival.

With more headliners and acts soon to be revealed, as well as the long-awaited announcement of this year’s Ship's Captain – last year’s being none other than David ‘The Hoff’ Hasselhoff himself – excitement is steadily mounting as we get closer to It's The Ship 2017. Stay up to date with all new announcements via its socials:

Head to www.galactix.asia/itstheship-2017 for cabin purchase