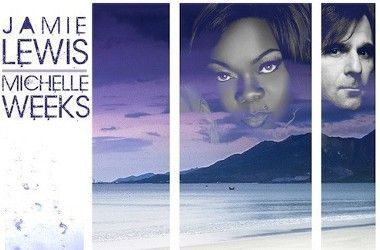 After 9 years since they unleashed their anthemic ‘Be Thankful’, the mighty musical duo that are Jamie Lewis & Michelle Weeks reunite once again for a stunning new single collaboration titled ‘Step Up’ on Purple Music! Featuring all the essential Jamie Lewis signature sounds:- a hefty bumpin’ bass groove, quirky synth hooks, grooving beats and a little wink to uncle disco, ‘Step Up’ is a hot slice of powerhouse which carries a positive uplifting message, beautifully delivered by Michelle. ‘Step Up’ hails a welcome return of 2 old friends who know exactly how to ignite our dance-floors with their soulful magic…

After 25 successful years in the business Jamie Lewis is recognized worldwide as one of the pioneers of house music and one of the scenes premier House DJ’s. Jamie Lewis first appeared on the Swiss club scene in 1985, spinning classic disco and funk before getting wrapped up in the late-’80s birth of house, becoming one of the European scene’s major players. In 1987 he opened his own record shop (Dee Jay Service in Winterhur, Switzerland), which became a mainstay of the Swiss DJ scene for 17 years! Already a major player in shaping house music’s future via his club presence, Lewis stepped in to the recording world in 1992, releasing his debut with the Italian UMM label, his sophomore release emerging two years later on the Canadian(John Acquaviva) Definitive Records. Lewis established his own Purple Music label in 1997, collaborating since then with influential artists of the dance music scene like the French legends Cerrone, Bob Sinclair, Etienne de Crecy, along with  legendary singers like Jocelyn Brown, the Swiss awards winner singer Seven and he has also remixed song for artists like The Weather Girls and Billie Ray Martin. In 2011 Jamie start a collaboration with the iconic superstar PRINCE releasing 4 songs on Purple Music including his own new remixes – ‘Dance 4 Me’ and ‘2 Nite’ from Lotusflower/IMPLSound Prince album & the recent new singles ‘Rock And Roll Love Affair’ & ‘Screwdriver’, topping dance and mainstream charts worldwide!! Recently Jamie Lewis had the honour to mix down at the legendary Paisley Park studio’s in Minneapolis the new Prince & 3rd Eye Girl Project ‘Fix Your Life Up’.

Since the early nineties, Michelle Weeks has been a staple in the Dance Music community. Her powerhouse vocals have been showcased on numerous releases, including the classics ‘The Light’ and ‘Be Thankful’. Michelle has worked alongside producers such as Tony Moran, Jamie Lewis, The Basement Boys, Andrea Paci, Bini & Martini, Seb Skalski, Ron Carroll, Terence Parker and Dj Dado, to name a few. Michelle has recently had successful releases with the Jinks, Jessie Garcia and Jason Chance. She has also collaborated with other dance music greats, like Barbara Tucker, Byron Stingily and many others. Michelle has appeared on some of the world’s biggest Dance music record labels, including Strictly Rhythm, Ministry of Sound, Purple Music, Stealth, Kingstreet, Defected, Code Red, MN2S & Jellybean Recordings. In addition to Dance music, Michelle Weeks has performed (both live and in studio) background vocals with and for Mariah Carey, Taylor Dayne, Trey Lorenz, Tramaine Hawkins and many others. She has also provided jingles for major companies, such as Kellogg’s, Fidelity & Kentucky Fried Chicken.

Switzerland’s No. 1 dance label, Purple Music (EST 1997) is owned and run by Jamie Lewis (Cem Berter) and his wife Manuela De Pasquale. Thanks to the mighty talents of this creative music industry couple, Purple Music now boasts a catalogue of over 450 titles including productions from icon superstar PRINCE, Cerrone, Joelyn Brown, Bob Sinclar, Sandy Rivera, India, Inaya Day, Michelle Weeks and many more!J amie and Manuela chose the name of the label whilst watching the Prince movie ‘Purple Rain’, as it was also their favourite colour. Jamie Lewis started his DJ career over 20 years ago.    In addition to their exciting music catalogue, for many years the label have run very popular club residencies all over the world, showcasing their special sexy blend of house music at Nikki Beach – Miami, Barasti Beach – Dubai, Supperclub – Amsterdam, Jubilee – Italy, El Divino & Jag Beach Club – Ibiza, Bar Rouge – Basel and Kaufleuten – Zurich.