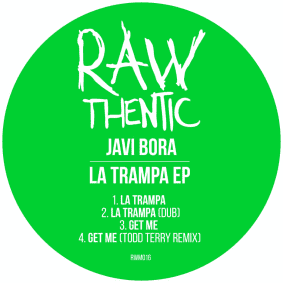 Spanish producer Javi Bora steps up on Rawthentic with the ‘La Trampa EP’ featuring two energetic house cuts and a remix by the legendary Todd Terry.

An integral part of the Ibiza scene, Bora is known for releases on a wide array of labels such as Robsoul, Too Many Rules and Do Not Sleep, as well as several collaborations with Chicago house advocates Jazzman Wax and Iban Montoro. Alongside this, Javi Bora has been a resident at Space Ibiza since 2013 and continues to receive regular support for his productions from some of the industry’s biggest names including Eats Everything, DJ Sneak and Mark Farina.

‘La Trampa’ opens with a funk driven bassline, crispy percussion and stormy effects while ‘Get Me’ employs a contagious sax which breaks down into wild arpeggios and gives the track a hypnotic feel. Enlisted on remix duties, Todd Terry displays a winning formula of deep stabbing chords and spacey atmospherics, taking it back to the roots of NY house music.