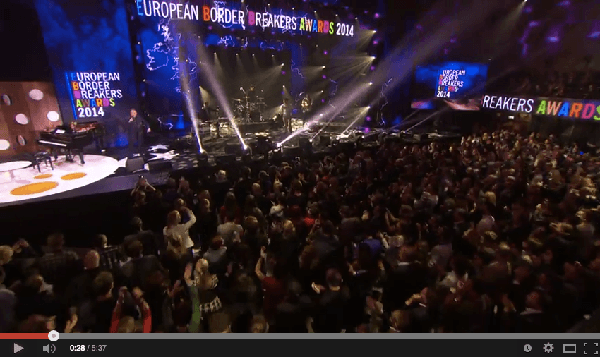 The winners of the 2015 European Border Breakers Awards (EBBA), celebrating the best new pop, rock and dance acts in Europe which have achieved cross-border chart success, were announced today by the European Commission and Eurosonic Noorderslag, the European music conference and showcase festival.

“My warmest congratulations to the winners of this year’s EBBA – I wish them great success in their future careers. The awards have proved an excellent launch-pad in the past for artists from Adele to Zedd, helping them to reach audiences beyond their home base and to increase their international visibility and sales,” said Androulla Vassiliou, the European Commissioner for Education, Culture, Multilingualism and Youth.

Europe’s cultural and linguistic diversity is a strong part of its cultural appeal, but linguistic barriers sometimes make it harder for artists to work internationally and achieve cross-border sales success. The EBBA seek to help them overcome these obstacles.

To be eligible for the awards, the artists must have achieved border-breaking success with their first international release in Europe between 1 August 2013 and 31 July 2014.


Background
The winners are selected by market analyst Nielsen Music Control on the basis of sales and broadcast frequency, as well as votes cast by European Broadcasting Union radio stations and music festivals supporting the European Talent Exchange Programme.

The winners will receive their awards in a ceremony hosted by TV personality and musician Jools Holland at the Eurosonic Noorderslag festival in Groningen, Netherlands, on January 14, 2015. The ceremony will feature performances by all or most of the winning acts. It will be streamed live via YouTube and broadcast by European TV channels and radio stations.

One of the winners will receive a Public Choice Award based on votes cast on the EBBA website from October 21 to 19 December. Up to 15 voters, chosen at random from different countries, will be invited to the award ceremony: each will be able to bring a friend and the prize includes their flight and hotel costs.

Now in their 12th year, the EBBA were previously funded by the EU Culture Programme and organised by Eurosonic Noorderslag in partnership with the European Broadcasting Union (EBU), with support from Buma Cultuur, SNN, the Dutch Ministry of Education, Culture and Science, Province of Groningen, the City of Groningen and Music Week.

Creative Europe is the new EU funding programme for the cultural and creative sectors. With a total budget of nearly €1.5 billion for 2014-2020, the programme aims to strengthen the international competitiveness of the sectors and to promote cultural diversity. The European music industry has an important role to play in both respects.